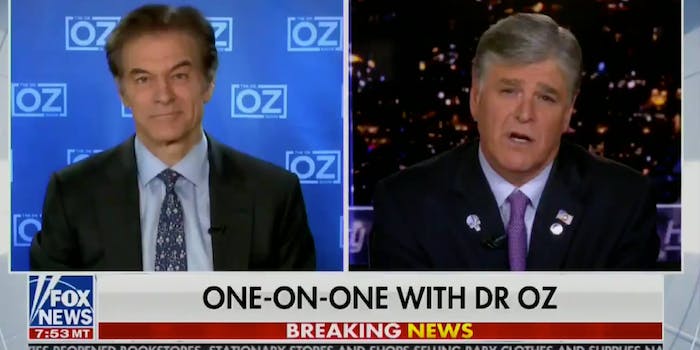 Dr. Oz says deaths associated with reopening schools is ‘a trade-off some folks may consider’

Dr. Oz has since apologized for saying reopening schools ‘may only cost us’ 2% to 3% more deaths, saying he ‘misspoke.’

Confusion and outrage spilled out online after media personality Dr. Mehmet Oz suggested reopening schools sooner rather than later so that the country could get its “mojo back.” Now, Dr. Oz has apologized, saying he “misspoke.”

HuffPost reports during an appearance on Fox News’ The Sean Hannity Show, Dr. Oz suggested getting kids back into schools and acclimated to a sense of normalcy could be worth the “trade-off” of about “2-3% in terms of total mortality.”

“We need our mojo back,” Dr. Oz said during the interview. “Let’s start with things that are really critical to the nation where we think we might be able to open without getting into a lot of trouble. I tell you, schools are a very appetizing opportunity. … I just saw a nice piece in the Lancet arguing that the opening of schools may only cost us 2 to 3% in terms of total mortality.”

Some found Dr. Oz’s comments to be dangerous rhetoric. As of now, over 600,000 people have tested positive for the coronavirus in the United States, and almost 30,000 have died from the virus, according to the New York Times.

Despite the outrage Dr. Oz’s comments solicited, some said they saw nothing wrong with the insight he provided.

During his interview with Hannity, Dr. Oz cited a review article from the medical journal the Lancet. (A review article summarizes already published research and studies.) Some online have pointed holes in Dr. Oz’s use of the article, however, due to the fact the percentages Dr. Oz references refer to school closures in the U.K., not the U.S.

According to the article, one study “concluded that school closure as an isolated measure was predicted to reduce total deaths by around 2–4% during a COVID-19 outbreak in the UK.”

Info from the article was also shared in an editorial, which many found to be insufficient for Dr. Oz to use.

Some thought Dr. Oz’s words were being morbidly misconstrued, but still deserved some criticism.

“… To get every child back into a school where they’re safely being educated, being fed and making the most out of their lives with the theoretical risk on the backside, might be a trade-off some folks may consider,” Dr. Oz told Hannity.

Dr. Oz issued an apology via a Twitter video on Thursday afternoon.

“I’ve realized my comments on risks around opening schools have confused and upset people, which was never my intention. I misspoke,” he said.

News journal Education Week reports that, as of April 16, “26 states and (three) U.S. territories have ordered or recommended school building closures for the rest of the academic year.”