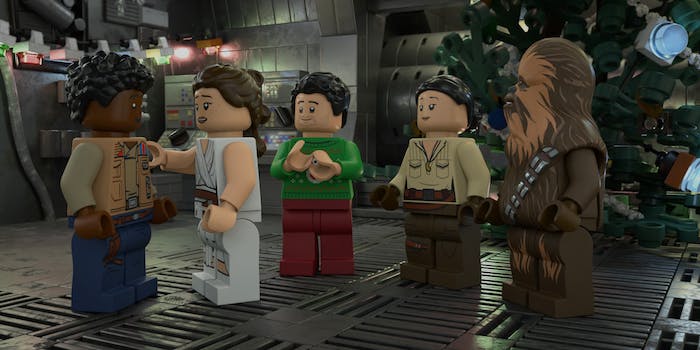 Like the original Holiday Special, this animated Lego film ties into the main Star Wars timeline, telling a lighthearted family story about Life Day, a traditional Wookiee festival. Rey, Finn, Poe, and Rose will travel to the Wookiee homeworld of Kashyyyk to set up a Life Day party for Chewbacca, interwoven with a story about Rey traveling to find the Jedi Temple.

From the description that executive producer James Waugh gave to Entertainment Weekly, it sounds like Rose will play a major role: “She basically saves the day, in many ways. We wanted to make sure we got a lot of Kelly in as Rose was going to be an essential part of whatever [the Resistance heroes’] future was going to be after Episode IX.”

That’s cool news for Rose Tico fans, but also slightly insulting in the context of The Rise of Skywalker, where Rose was reduced to a virtually irrelevant background role.

After her debut in The Last Jedi, fans expected plenty of screentime for Tran in the next movie. But many were disappointed by her minimal role, interpreting it as an offensive demotion of the franchise’s first Asian heroine—and possibly as a sign that Disney was catering to the online backlash against Tran herself.

Evidently, Tran still enjoys a good working relationship with the studio, as she will voice the lead role in Disney’s upcoming movie Raya and the Last Dragon. But it’s still kind of weird to think that she’ll get more meaningful screentime in the Lego Holiday Special than she did in The Rise of Skywalker.