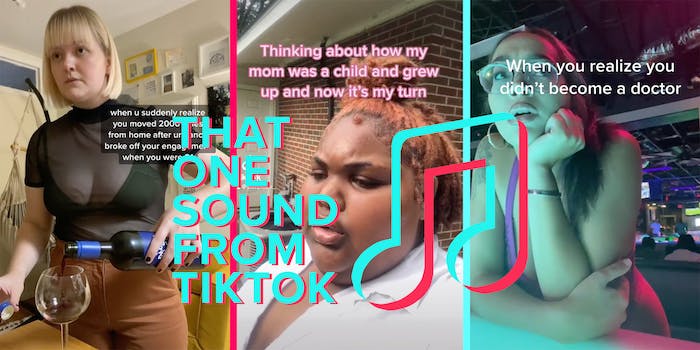 When you realize there are people who were born in 2006.

This week, we look into a sound I haven’t been able to escape on TikTok. But it’s also pretty appropriate for the official start of summer. It’s hot, we’re contemplating a lot of things, and an old LeBron James commercial is the soundtrack.

The sound on TikTok features a snippet of Kool & the Gang’s 1974 song “Summer Madness,” which was sampled in DJ Jazzy Jeff and the Fresh Prince’s 1991 hit “Summertime.” But this particular audio also includes a man saying “Oh, lord” just as the music swells, which drives home the various existential crises illustrated in this trend.

It appears the origin, at least of this sound, is a June 6 TikTok from jazzyfizzle_, in which she’s “Thinking about how my mom was a child and grew up and now it’s my turn.”

Others pondered similar deep thoughts, such as “When u realize that people perceive you,” editing around the song’s three ascending notes for a more cinematic feel.

“When you realize that right above your head is an endless void,” wrote jackbloor, stopped by that thought while gardening. The sound was also applied to quite a few videos about working a soul-sucking job, having adult responsibilities, or creating generational wealth.

Others had jokes. “Realising I’m never going to heaven because it’s up a stairway,” wrote danielmozeley.

Ryanair, which was in the news last month after one of its flights was diverted under threat of terrorism and a Belarusian journalist arrested, used the sound in a recent TikTok about its planes having human eyes and mouths. It’s not clear if this is a new customer engagement strategy.

If you’re of a certain age, the sample might be familiar: It’s from a 2006 Nike commercial featuring LeBron James, in which he plays himself and three other LeBrons. It’s “Wise LeBron” who says “Oh, lord,” as “Business LeBron” dives into the pool in a white suit to “Summer Madness” (right after snapping his flip phone closed).

The commercial was part of a 2006 advertising campaign for the Zoom LeBron IV sneaker, and the characters were used in a series of other short ads. “The LeBrons” were so popular they were made into action figures, and a 2011 animated series.

Coincidentally, there is another “Oh, lord” sound going around TikTok right now. It’s from Criminal Minds actor Shemar Moore, and is perfect for any silly and/or goofy mood.