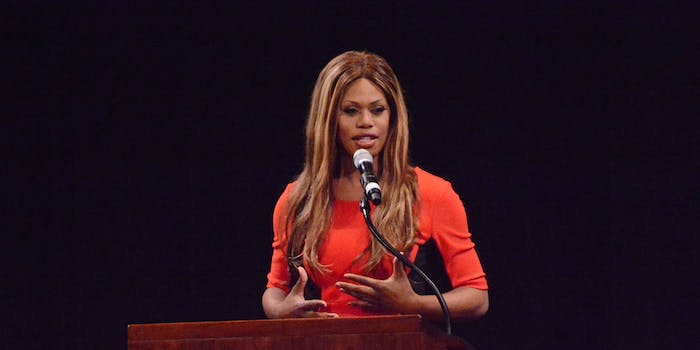 Laverne Cox and Aydian Dowling are beautiful—but so are all trans people.

It’s been a big month for attractive transgender people in magazines. Orange Is the New Black‘s amazing Laverne Cox continues to break down barriers as she graces the pages of this month’s Allure. Simply seeing a trans woman of color appearing in a mainstream beauty magazine is a major step forward, but Cox is pushing the envelope further: She appears nude. At the same time, transgender athlete Aydian Dowling is poised to win Men’s Health magazine’s “Ultimate Guy” contest, which would put him on their cover.

Both Cox and Dowling are proof positive of a concept that’s still sadly new to far too many people: that trans people can be beautiful. However, as that idea finally gains mainstream acceptance, there several potential pitfalls that need to be navigated. We must remain mindful of the how easily photo shoots can blur the lines of objectification, if the agency and humanity of trans people aren’t carefully considered.

It’s also critical that these images are balanced with representation for the diverse spectrum of the transgender community, in order to avoid unnecessarily stigmatizing trans people who do not meet the beauty ideals represented by folks like Dowling and Cox.

It’s not exactly news that Laverne Cox is beautiful. She made Paper magazine’s 2014 list of most beautiful people, and she’s appeared on numerous magazine covers, including Time, Candy, and Essence. However, her shoot for Allure is the first time she has appeared nude. The photo itself is gorgeous and tasteful, and Cox made it clear that she had specific reasons for agreeing to appear naked:

I said no initially, thought about it, and said no again. But I’m a black transgender woman. I felt this could be really powerful for the communities that I represent. Black women are not often told that we’re beautiful unless we align with certain standards. Trans women certainly are not told we’re beautiful. Seeing a black transgender woman embracing and loving everything about herself might be inspiring to some other folks.

Historically, the only place we’ve seen nude trans women has been in been in pornography, where we are largely shown as a fetish novelty. Seeing a trans woman—particularly a trans woman of color—presented as simply a beautiful woman is an incredible victory for normalizing and humanizing the beauty for transgender bodies.

Transgender men, on the other hand, have long-suffered almost complete invisibility, particularly in mainstream media. If Aydian Dowling wins the Men’s Health competition, he would become the first out trans man to appear on any mainstream magazine cover. Like Cox, Dowling is much more than good looks: He established a clothing company to raise money for transgender causes and a YouTube channel for fitness focused on the trans community.

It would be so affirming to just know that the man that I set out to be is somebody that people think is a good man. To break those stereotypes, but still be a man. Feel pride in masculinity, but not putting down femininity. That would be so important to me.

Obviously, seeing a handsome, likely shirtless trans man on a men’s magazine cover would be downright revolutionary. However, even if Dowling doesn’t win, the campaign to put him on the cover has done a lot to increase the visibility of a section of transgender community that’s too often ignored.

Even as we win these victories, the transgender community continues to struggle with being more an object of fascination in the media than actual people. When Cox appeared on Katie Couric‘s daytime talk show last year, the actress endured incredibly inappropriate and intrusive questions about her surgical history.

And on the Internet, numerous websites continue to publish lists and articles that focus on the gee-whiz novelty of trans people’s birth gender contrasted with their attractiveness, with titles like “10 Gorgeous Women (Who Were Born Male)” and “11 insanely hot men you will not believe are trans.” When documentaries about trans people are produced by non-trans people, they often focus heavily on “before and after” pictures that reinforce the otherness of being transgender.

Historically, the only place we’ve seen nude trans women has been in been in pornography, where we are largely shown as a fetish novelty.

Given Cox’s initial reluctance to participate in the shoot, it seems likely that she was aware at how easily it could have turned from representation into objectification. Recently named to Time’s newest “Most Influential” list, interest in her has never been higher, and in a different context, that same photo could be absolutely exploitative.

While the increasing visibility of trans people is critical to our progress and the acceptance of trans bodies as beautiful is important, we need to focus on retaining our agency and our essential humanity during that process.

This is especially important for transgender people. Given that only about 8 percent of people in the U.S. know a trans person, media representations are the vehicle through which most of the population is exposed to the transgender community. Therefore, we need to be aware of how the dominance of trans people who conform to traditional notions of beauty can skew public perceptions of the community as a whole. While we should celebrate those who are represented, we need to reflect on those who are left out.

The reality is that not all of us look like Laverne Cox or Aydian Dowling. Trans people come in dizzying array of shapes, sizes, colors, ages, and degrees of attractiveness, and there’s no less diversity within our community as there is within the greater population. There needs to be a greater focus on the notion that all trans people are beautiful, not simply those who are camera ready.

The reality is that not all of us look like Laverne Cox or Aydian Dowling.

However, it’s important not to place this burden on Cox or Dowling alone. Cox has spoken at length about the problems of how beauty standards affect trans women and continues to preach the notion that “Trans Is Beautiful.” Dowling further stressed body positivity and self-acceptance in an interview with FTM Magazine: “Some areas of my body used to remind me of everything I’m not. Now they represent everything I am.”

In order to represent the wholeness of the trans community, we need to continue press media outlets for balanced, humanistic portrayals of the wide diversity of spectrum of what it is to be transgender. If we want to showcase Laverne Cox’s body, we should also listen to what she has to say and remember that it’s not just that some trans bodies are beautiful. All trans people are beautiful.

Photo via KOMUNews/Flickr (CC BY 2.0)