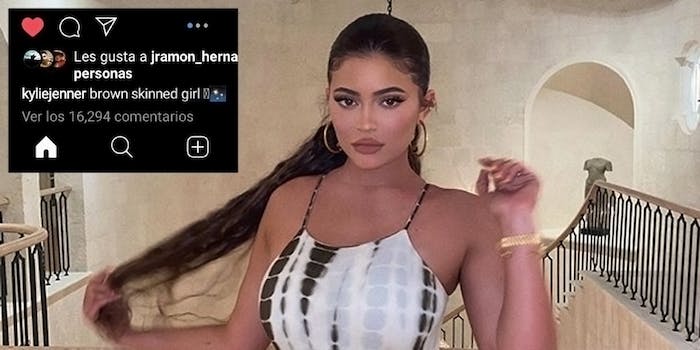 Kylie Jenner allegedly classified herself as a “brown skinned girl” in a recent Instagram photo caption.

The caption, however, now reads “brown eyed girl” and Jenner and sources close to her are denying the existence of the original text. Many on Twitter, and the post itself, are crying foul.

TMZ reports that “the caption was always ‘brown eyed girl,’ and that the other caption making the rounds online is simply a doctored image circulated by trolls. Her camp is firm — she never changed it at all.”

Celebrity news site the Shade Room stirred up the storm as well. But in its post, a dismissive Jenner writes, “this is photoshopped. never said this. have a good day.”

Later she would explain to her followers, via IG stories, that she didn’t originally have any verbiage in the original post, only her signature white heart and stars emoji. It was later, she explains, that “brown eyes girl” was added onto the post.

After her feature in Cardi B and Meg the Stallion’s popular and controversial “WAP” music video, and continual accusations of cultural appropriations toward the Kardashians, people are wary.

Many commented on how the video, or a loud set of viewers, centered Jenner.

In a now-deleted tweet, Cardi defended her choice in having Jenner in the video: “Why did I put Kylie on my music video? She treated my sister and daughter so lovely at her kid bday party.”