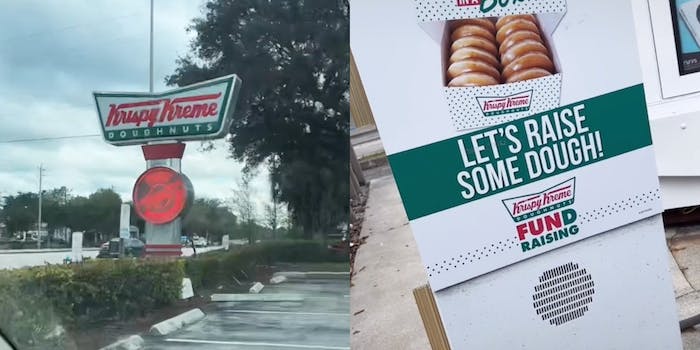 ‘Is it true that you get a free donut when that hot sign is on?’: Woman tests Krispy Kreme ‘Hot Light’ rumor in viral TikTok

According to the drive-thru worker, it's not true—at least at that location.

A woman on TikTok decided to test the theory that Krispy Kreme gives customers a free donut when its “Hot & Ready” sign is lit up. The short answer is no.

Haleigh (@baileyhaleigh) recorded herself trying her luck as she went through Krispy Kreme drive-thru in Fort Lauderdale, Florida. She then shared the footage on TikTok where the video garnered nearly 584,000 views as of Saturday.

As she pulled up to the drive-thru speaker, Haleigh asked, “Is it true that you get a free donut when that hot sign is on?”

“No ma’am,” was the employee’s quick response.

Haleigh asked if the employee was serious, and they responded, “Yes, ma’am.”

So Haleigh ordered her donuts—and presumably paid for them.

“They are frauds,” she joked in the video’s on-screen caption.

Viewers supported Haleigh, saying it never hurts to try, but some pointed out how quickly the employee responded during the exchange.

“Never hurts to try! She responded QUICKLY with no ma’am!” one viewer commented on the video.

“Well, she was a ray of sunshine,” another viewer said sarcastically.

One user joked, “She was QUICK and READY for you to get out her line.”

Some viewers claimed that the theory is actually correct.

“I’ve gotten so many free donuts at the hot light!” one viewer wrote.

“It’s actually true but [due] to covid we can’t give out anymore,” someone else claimed.

In 2017, Krispy Kreme said in a statement to Delish that the Hot Light only signals that donuts are hot and fresh coming off the line—not that it’s time to get a free donut. However, since Krispy Kremes can be franchised and many of its locations are run by individuals, the Hot Light may have differing meanings depending on location.

Basically, if a store owner decides to give out free donuts when the Hot Light is on, employees can do that. But it’s not a requirement across the stores.

The Daily Dot reached out to the creator via TikTok comment and Krispy Kreme via PR email.