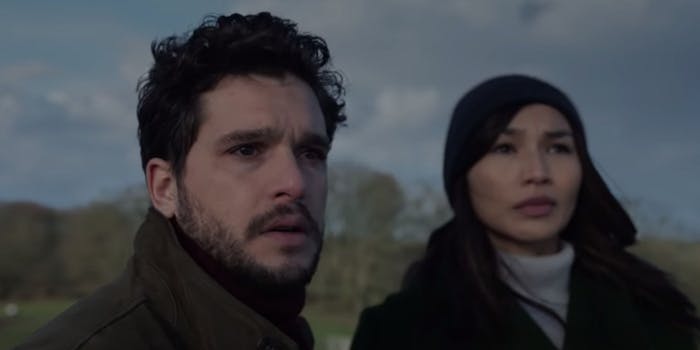 Kit Harington’s ‘Eternals’ character is much more than he seems

The 'Game of Thrones' star plays Sersi's boyfriend in 'Eternals'.

Among the massive ensemble cast of Eternals, Game of Thrones star Kit Harington has a deceptively minor role. He plays Dane Whitman, the nice-but-dull human boyfriend of the film’s lead character Sersi (Gemma Chan). Narratively speaking, he’s just a love interest, but by the end of the movie, he’s dropped some strong hints that he’s more than just a likable civilian.

Some Marvel comics fans may already recognize Dane Whitman as the hero Black Knight, but don’t worry if that name means nothing to you. Like the Eternals, Dane is not exactly an A-list character. And the MCU seems to be rebooting his origin story.

Eternals introduces Dane as Sersi’s boyfriend and coworker, a teacher and academic in modern-day London. Early in the film, Sersi gives him an unusual gift: An antique ring depicting his old family crest. Then Dane basically vanishes for the rest of the movie, reuniting with Sersi for the final scenes. They take a romantic stroll together in London, and Dane is just about to reveal some secret information about his family history when Sersi gets abducted by the Celestial god Arishem. And that’s the end! So while Dane doesn’t actually discuss the Black Knight legacy, the film drops a massive hint that he’s not a normal human.

Who is Marvel’s Black Knight?

Created by writer Stan Lee and Joe Maneely in 1955—before the dawn of Marvel itself—Black Knight began as a literal medieval knight, Sir Percy of Scandia. The second Black Knight was a descendent of Sir Percy, the supervillain Nathan Garrett. Dane Whitman is Garrett’s nephew, taking over after Garrett was defeated by Iron Man.

Dane Whitman’s Black Knight is more like an Arthurian warrior than a traditional superhero. He’s a scientist and master swordfighter who wields magical weapons like Excalibur and the Ebony Blade—the Black Knight’s signature weapon. He’s also one of Sersi’s love interests in the comics, although he more often appears in storylines with the Avengers and X-Men.

This character has 54 years of Marvel backstory, so we don’t need to get into the nitty-gritty details here. The more relevant question is what he’ll do in the MCU. Eternals teases Dane Whitman’s origin story, and given the film’s open-ended finale, it’s safe to assume that he’ll return for the sequel. However, he’s also the kind of character who could appear in a Disney+ spinoff. Kit Harington already has leading man status, and a role as a sword-wielding hero is well within his wheelhouse. Black Knight would also be an obvious choice to kick off a team of British superheroes like Captain Britain and Faiza Hussain.