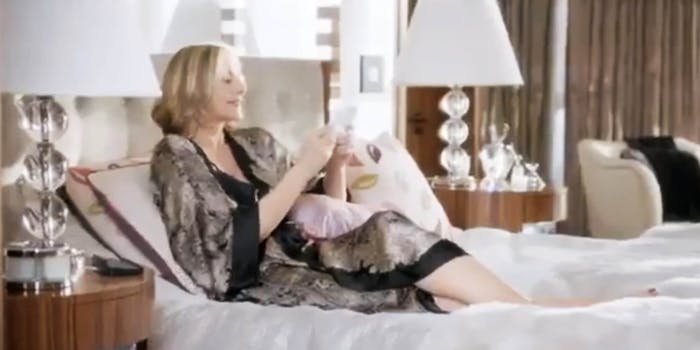 As long as celebrity endorsements have been a thing, celebrities have been making … shall we say, questionable endorsements? Like, who can forget the time that Kim Kardashian was the face of a new Charmin public restroom opening in Times Square? Or the time Ozzy Osbourne starred in an “I Can’t Believe It’s Not Butter” commercial? (Errr, most of us, actually!) So, you may or may not recall Sex and the City star Kim Cattrall appearing in a 2012 Super Mario 3D Land commercial for the Nintendo 3DS handheld game console.

“I’ve discovered a new way of enjoying my spare time,” says Cattrall seductively in the 30-second spot, while wearing a thin satin robe.

“Run Mario Run!,” she then exclaims. “I go on magical adventures with a certain Mario. And guess what. He’s totally into dressing up. That tanuki suit is my particular favorite.”

“There are many men in my life, but for a few minutes, or a few hours, I’ll always find time for Mario,” she adds, at the end of the commercial.

Suffice to say, it didn’t take long for Snetiker’s tweet to go viral—if for no other reason than the perplexing way Cattrall pronounces “Mario” as “Marry-o.”

Even Cattrall personally weighed in, although one could argue that she’s uh, not helping! “I’ll always find time for Mario,” she wrote, retweeting the ad.

For what it’s worth, the commercial, which originally ran in the UK, was specifically targeted to women.

“The new campaign is all about women having fun,” said Vanisha Kavia, Junior Product Manager at Nintendo UK, in a statement at the time. “Kim Cattrall is an inspiration for women of all ages; she’s attractive, successful, intelligent, and knows how to have fun. Plus, she is a genuine fan of Nintendo!”

Clearly! We can only hope Cattrall managed to snag herself a Nintendo Switch before quarantine set into effect because otherwise homegirl needs some Animal Crossing in her life, pronto.