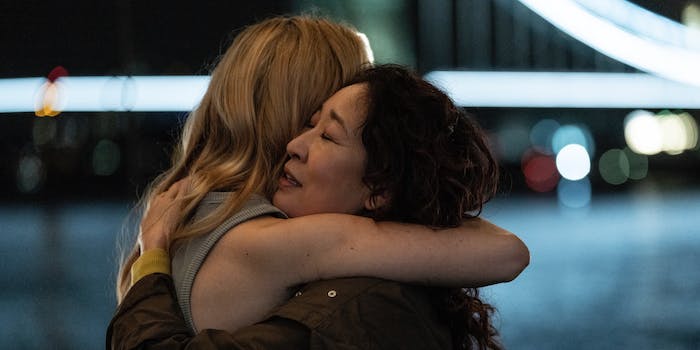 Some people also want the show's original creator to write a new ending.

Killing Eve fandom has had a rough few days. The series took its final bow on Sunday, and after four seasons of teasing the central relationship between Eve (Sandra Oh) and Villanelle (Jodie Comer), the series finale finally confirmed an Eve and Villanelle relationship only to swiftly kill one of them off in the show’s final minutes.

The final shot, a wide shot of the Tower Bridge as “The End” appears after a raw scream from Eve after watching Villanelle die, makes the ending seem final. Showrunner Laura Neal, executive producer Sally Woodward Gentle, and Oh and Comer all confirmed in postmortem interviews that Villanelle died; Neal went as far as to call Eve’s final moments a “rebirth.” But that hasn’t stopped people from wondering if the show might have one more trick up its sleeve.

On places like Twitter, TikTok, and the Killing Eve subreddit, some fans are throwing out theories that there might actually be a secret episode of Killing Eve that will air on Easter Sunday. Versions of that theory pointed to the close proximity of Easter, Christian symbolism that appeared in season 4 including Villanelle talking to an imaginary version of herself dressed like Jesus, and even the new episode count (if a secret episode existed, it would be 33) as potential factors.

“Like if they don’t have villanelle rise from the dead on Easter Sunday then idk what all the religious theming was for lol,” TikToker @sorrybabyxxxxx commented on her video where she theorized that Villanelle faked her own death with blank bullets and blood capsules like the book counterpart.

Another iteration included a screenshot from Rotten Tomatoes, which listed Killing Eve season 4 as having nine episodes, as proof. (It’s actually because the season 4 premiere is listed twice.)

If the “secret episode” conspiracy sounds familiar, it’s because it also occurred after the final episode of Sherlock’s widely derided fourth and final season, which had an ending so despised some fans posited that the real ending was still to come based on some obscure context clues from a previous episode. (Sherlock writer Steven Moffat quickly debunked that one.)

Two Change.org petitions, one titled “Villanelle deserves better (and eve too),” the other calling for Killing Eve creator Phoebe Waller-Bridge (who left the series after the first season) to rewrite the ending, have circulated online; the first has over 1,300 signatures, the latter over 4,000 signatures.

Several people also tried to loop in science when trying to make sense of how Villanelle’s death was even physically possible.

“what’s that stage of grief called where you whop out physics and laws of nature to show how dumb and ridiculous the season finale was?” @oriansstars asked. “because we reached that point.”

How much traction does the theory actually have? It’s hard to say. Some of the people who want a secret episode to exist acknowledge how unlikely it actually is, and more than a few skeptics brought up the Sherlock comparison. It could very well turn into a punchline.

The range of theories trying to suggest that we didn’t get the real Killing Eve ending this past Sunday or that Villanelle faked her own death also tapped into another aspect of fan theorizing: logic theory. In shows where it often occurred—Game of Thrones’ later seasons had a lot of them—people would often try to focus on minute details. That might be a hint of dialogue, a minor detail, or a directing flourish, in an attempt to make it make sense or, more often than not, explain a perceived plot hole. In that realm, it makes sense for someone like Villanelle to have faked her own death because elements presented in the background would’ve physically prevented a sniper from shooting at her on the boat and in the river. The barrage of Christian symbolism could lead to some kind of resurrection.

More often than not, the underlying current underneath is something as simple as the writing, a directing flourish, or even an element of drama.

One common piece of criticism against a vehement backlash to a show or film’s controversial ending is that people are just upset that they didn’t get the happy ending they wanted. And while that may be true for some fans, it’s also something of an oversimplification of what the backlash even is, particularly when it’s well-argued, well-trodden, and critics can point to just how harmful it can be. It’s not necessarily that every single person upset about the end of Killing Eve wanted Eve and Villanelle to ride into the sunset for a happily ever after; longtime fans were more than aware of the nature of the show and the idea that Eve or Villanelle, or both of them, could’ve died.

Sure, some of the fan theories swirling around Killing Eve around might be a bit nonsensical or will never come to pass; even though revivals are becoming more popular, several of those “remake the final season” petitions were all for naught. But in the days following that finale, it’s also a way for many of them to try and make sense of an ending that, no matter how many postmortem interviews they may read or how long they might analyze those final minutes, defies all logic.