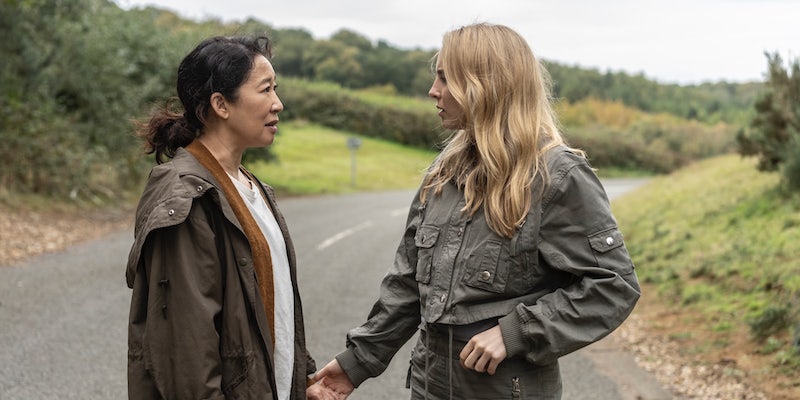 The finale proved to be divisive.

When Killing Eve—BBC America’s often subversive spy thriller pitting Sandra Oh and Jodie Comer against each other in a constantly evolving (and sometimes messy) battle between an MI6 agent and a sociopathic assassin—first premiered in 2018, it was praised for its twist on what people expected from a cat-and-mouse game, the writing from creator Phoebe Waller-Bridge, and Oh and Comer’s chemistry. While Oh and Comer’s performances never faltered, the show’s quality ebbed and flowed as each season brought a new showrunner into the mix (Emerald Fennell in season 2, Suzanne Heathcote in season 3, and Laura Neal in season 4), but an uneven final season ended on a sour note with the deployment of one of TV’s more controversial clichés.

The series finale, “Hello, Losers,” reunited Eve (Oh) and Villanelle (Comer) one last time because Eve needed Villanelle’s help taking down the rest of the Twelve, the mysterious assassin organization at the center of the series. Prior to the finale, Villanelle, still hurt by Eve’s decision to have Villanelle jailed so that the former could try to move on, wants nothing to do with Eve, but a gnarly attack and a stint in a bothy with another couple to keep out of the rain changed that. After stealing the couple’s camper van, they kiss in the middle of the road and infiltrate a boat on the River Thames so that Villanelle can take out the Twelve; Eve keeps the passengers busy by stepping in to officiate a gay wedding.

But their happiness doesn’t last long: Eve and Villanelle barely get enough time to celebrate the end of the Twelve before a sniper takes out Villanelle, and continues firing at her even after she shields Eve and pushes her into the water. The camera cuts to Carolyn (Fiona Shaw), Eve’s former boss who ordered the shot and will likely use Villanelle’s death to earn her way back at MI6. Eve emerges from the water and screams before the show’s familiar font appears and reads, “The End” before cutting to black.

In postmortem interviews, Comer called Villanelle’s death “inevitable” and Oh described it as “true to the show” while showrunner Laura Neal noted that she “dies in a way that feels, I think, triumphant for her” because she saved Eve in her final moments.

“We spoke about that moment of Eve bursting out from the water and screaming really early on in discussions about the ending, and really early on with Sandra,” Neal explained to Decider. “It felt really important to us, that moment, because it signals Eve’s rebirth, and we really wanted a sense of her washing off everything that had happened in the past four seasons and being able to begin again, but take everything that she has learnt and everything that Villanelle has given her into a new life.”

As I watched the ending unfold, I mostly met it with resignation: How, in 2022, is Bury Your Gays still seen as an acceptable resolution of queer storytelling?

In some ways, Villanelle’s death is an encapsulation of the messiness of season 4 that predated it. Flashes from many of the characters who departed over the years, including former colleagues and Eve’s departed husband Niko, while Eve performs a Sia song at karaoke, barely registered. One episode included lengthy flashbacks to the original formation of the Twelve while one major Carolyn subplot—finding out who killed her son—ended with the reveal that she knew all along. Allegiances shifted quicker than you could register them and did little to make a show that’s long since lost the thread compelling.

But Killing Eve’s core relationship between Eve and Villanelle—a consistent highlight as the show operated on choppy waters—has been, to put it lightly, complicated. Part of the allure that Killing Eve played with over the years was whether, when they were face-to-face, Eve and Villanelle would try to kiss or kill each other; you could almost always argue for both. They’ve both attempted to murder the other person, their first kiss happens in the middle of fighting each other on a double-decker bus, and they’ve each shunned each other when the other person wanted to connect.

Given Eve and Villanelle’s frequent entanglements with MI6, the Twelve, and many of the assassins that the latter organization employs, as well as the pervasive violence in their world, one or both of them dying before the end wasn’t out of the realm of possibility. You could argue that allowing Eve to live—or making her death more of a metaphorical one while Villanelle is the one who falls—is a subversion of the title we’ve seen over the past four seasons.

For some viewers, Villanelle’s death had echoes of The 100’s execution of Bury Your Gays (in which an LGBTQ+ character is killed off, often to motivate one of the main characters), which killed off Lexa shortly after they slept together. Alongside the deaths of several queer characters in a short timeframe, it led to widespread criticism over the use of a trope that’s existed for decades; Buffy the Vampire Slayer’s Tara is an early example. It’s been subverted in shows like Star Trek: Discovery, but other series such as The Magicians played it straight. While the dire state of LGBTQ+ policies in the U.S. may have been different when the episode was written and filmed, the concern over how only seeing queer love stories end in tragedy affects audiences has been a major concern from people who criticize the use of Bury Your Gays in queer storytelling for years.

That’s not to say that a show can never kill off queer characters; Killing Eve certainly didn’t shy away from it. Two episodes earlier, we watched Villanelle kill the Twelve’s Hélène (Camille Cottin) for putting a hit on her, and early in the series finale, Eve blinded the assassin Gunn (Marie-Sophie Ferdane), who previously warmed up to Villanelle. The show also garnered criticism for leaning into the Bury Your Gays trope during its first (and best) season after the gruesome death of Eve’s coworker Bill—who is mentioned off-hand in the finale—at Villanelle’s hands shortly after we learn he’s queer.

As the dust settles on Killing Eve, what feels particularly cruel isn’t that Villanelle died, or that she died saving Eve, or that the show, once again, found a more permanent way to keep them apart. It’s that she, like so many other queer characters on television, was callously executed so shortly after Eve and Villanelle gained an ounce of reprieve. But instead of exploring some of the many possibilities that it could fuel—it doesn’t have to be a binary of happily ever after vs. death—Killing Eve took the simple (and overdone) route.