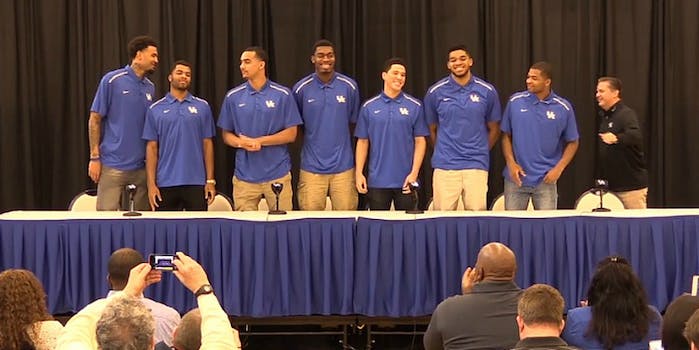 Plus, why Coach Calipari continues to reel in America's most talented kids.

You want to know how good Kentucky basketball coach John Calipari is at recruiting? Check out the video below from Thursday when seven—yes, freakin’ seven (!)—of his Wildcats players declared for the NBA draft.

“Now it’s time for these young people to let us know what they’re going to do,” Calipari said. “Maybe the easiest way is, if you’ve decided to put your name in the draft, why don’t you stand up.” Click the video to see what happened next (though if you count the number of players seated on the dais and read the first paragraph of this story, you should have your answer).

That’s Aaron and Andrew Harrison, Willie Cauley-Stein, Karl-Anthony Towns, Trey Lyles, Dakari Johnson, and Devin Booker who are eschewing another season of college eligibility. Even though the Wildcats didn’t win the NCAA tournament—they fell in the semifinals to Wisconsin, and the town of Lexington proceeded to riot in response—look at all those smiles on all the faces of those potential millionaires.

When college basketball observers disparage the scourge of one-and-done players—those who stay only for a season of seasoning in college before leaving for the NBA—the above video represents exactly what they’re talking about (Towns, Lyle, and Booker are freshmen, while the Harrison twins and Johnson just finished their second seasons at Kentucky).

Kentucky finished 38-1 this season, and the vast majority of the team is leaving.

The 7 Kentucky players who declared for the NBA Draft scored 85.7% of the team's points this season

But do you think Calipari is worried? It’s doubtful. Even before the season, Calipari told his team that one of his goals for the year was for eight of his players to have the chance to be drafted. Next season, maybe he’ll say the same thing.

That’s because Calipari is a recruiting maestro. He’s landed either the No. 1 or No. 2 recruiting classes in the country for every year since 2009, and one big reason for that is because of his inclination for social media.

As the Daily Dot noted 14 months ago, “In 2009, extrovert swindler and controversial basketball coach John Calipari arrived at the University of Kentucky and started a Twitter account. Coach Cal began engaging with fans, promoting his charitable efforts, and updating team travel plans with the sort of human interest nuggets that fans devour… Cal helped usher in an era of social media-based recruiting.”

High-level players tend to respect that, and with his social media success, those perhaps are two reasons why Bob Hill—who coached four NBA teams and who worked with Calipari at Kansas in the early 1980s—told USA Today that Calipari was the greatest recruiter in college basketball history.

His success often has come at a price, though. Two of his previous employers, the University of Massachusetts and Memphis, faced sanctions after he left because of NCAA violations committed under Calipari’s watch. Yet, he still continues to get jobs, including at Kentucky, one of the most-heralded programs in history, and while some, like a U.S. senator from Missouri apparently, show disdain for the idea of one-and-done players, Calipari clearly doesn’t mind.

And hell, it’s not like Calipari has never had to restock a large portion of his team. As ESPN Stats & Info points out, the seven who are leaving for the draft are the most a college team has ever lost in one season, but in 2012, Calipari’s team sent six players to the land of pro basketball.

Kentucky: 6 players taken in 2012 draft, tying the record but with fewer picks in that draft compared to the 1970s pic.twitter.com/Ou44CMpLKK

Maybe Calipari embraces the one-and-done players because they help him win so much, or maybe it’s because he knows he can simply reload for the next season. Like 2015-16, for instance. Despite losing so much of his team, the Wildcats probably will be awesome, anyway. Even without all those key pieces, CBSSports.com’s Gary Parrish ranked Kentucky third in his Ridiculously Early Preseason poll for 2015-16, writing, “it would be foolish to assume John Calipari will have anything other than one of the nation’s best rosters even if he loses seven players.”

But here’s something to think about. The last time Calipari lost so many players, the squad didn’t make the NCAA tournament that next season. In fact, the Wildcats lost to Robert Morris (the college team, not this guy) in the first round of the NIT tournament.

Either way, Calipari likely will continue to reel in the top recruits in the country, watch them leave after a year, and then restock the cupboard.

“It’s his history with what he’s able to do for us,” Lyles said in 2014, via SB Nation. “He’s taken guys like us and helped develop us and take us to the next level, to the NBA. That’s what everybody wants to do.”

That’s why they flock to Lexington to play for the best recruiter of all.