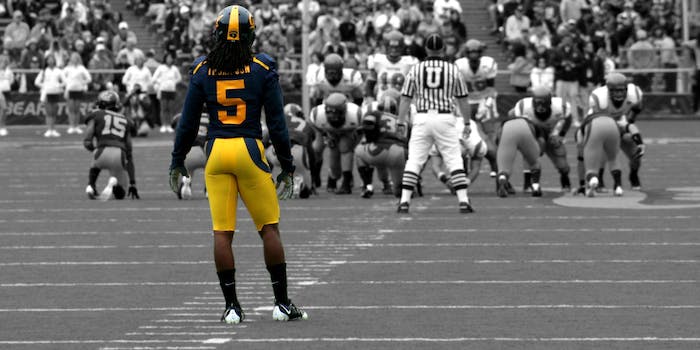 The NCAA’s Snapchat recruiting is so crazy, it just might work

Make all the jokes you want, this is smart move toward deregulating the comically inconsistent rules about who student athletes can and can't talk to.

Social media is a critical tool for those in the business of collegiate recruiting, and the game just got a little more interesting. The scroll of permissible apps got a big addition last week when the NCAA announced that effective Aug. 1, most college coaches will be able to use Snapchat with prospective student athletes (football, cross country, swimming, and diving will still not be able to use it).

If for some reason you haven’t heard of the intensely popular-with-the-kids app, it works by sending “self-destructing” pictures that linger on the recipient’s screen for up to 10 seconds. The “snap” goes away, hopefully for good, afterward. (They are, of course, easily captured, and the system’s been hacked to death, leaving it full of security holes.)

The easy jokes about its becoming NCAA eligible arrived like express trains.

NCAA says Snapchat is acceptable for recruiting. That’s a whole new way for you to creep recruits out, Tom Crean.

The peanut gallery took one of two comedic angles: Imagining a crotchety head coach sending particularly narcissistic, bathroom mirror selfies; or imagining seedy boosters sending photos of money piles. It was kinda funny, but also holds some truth: If Snapchat could lead to you’re being implicated in something you don’t want to be implicated in, why would the NCAA approve it?

Because the NCAA is smart. In it’s own words, here’s what the NCAA was thinking, per an email exchange that its assistant director of public and media relations, Meg Durham, had with Minnesota Daily:

During the recruitment process, Snapchat and text messaging are currently not allowed, except in basketball and men’s ice hockey, until after a prospect signs a NLI or a school’s written offer. Email and direct messaging on Twitter or Facebook are allowed during the recruitment process. In January, Division I members adopted new recruiting rules that remove restrictions on the modes of electronic communication, including text messages and Snapchat, in all sports other than football, cross country/track and field, and swimming and diving. The new rules were adopted in response to membership feedback that supported removing those restrictions.

Simply put, the NCAA has evolved to a point where it feels that coaches texting recruits is a rational extension of communication (except of course for football, because the thought of Tom Albetar sharing pictures of Trent Richardson’s SUV with prospective ‘Bama running backs is surely too terrifying to sanction). Even Facebook and Twitter are allowed, because these things are now considered reasonable and common communication tools.

But teens don’t write on Facebook walls (sorry, “Timelines”) anymore, and Twitter is limiting—and they’ve got something they like more than texting. It’s called Snapchat; Snapchat is their text message. Which is why this was a smart move by the NCAA.

It also helps that Snapchat is intended for undocumented, consequence-free communication of questionable moral fabric. There will likely be debate over whether a (theoretically) disappearing message is a good thing for the recruiting process. Regardless, this is a critical step toward deregulating the comically inconsistent rules about who student athletes can and can’t talk to. The storm has been unavoidably brewing for the last five years, and less engaged coaches better be ready.

Really, Snapchat is just the latest veil lifted from the attempts at shielding student athletes from the business they’re entering. Case in point, John Calipari.

In 2009, extrovert swindler and controversial basketball coach John Calipari arrived at the University of Kentucky and started a Twitter account. Coach Cal began engaging with fans, promoting his charitable efforts, and updating team travel plans with the sort of human interest nuggets that fans devour. His brand was “Coach Cal, thousand watt smile personnel manager that may have turned the other way when it was revealed that his point guard cheated on the SATs—but only because he also knows college sports are institutionally bunk and cares about his student athletes and their professional interests.” Who cares if he forfeits Final Four appearances from two different schools? He gets kids paid.

Cal helped usher in an era of social media-based recruiting. Social media and college sports have no doubt seen bumps and bruises, accented by headlines about fake girlfriends and racist team moms. But it’s worth pointing out what the social media-savvy Calipari has done on the recruiting trail since he joined Twitter:

So go ahead and laugh it up. Make all the screenshot jokes you want. Snapchat’s legality is a critical tip in the competitive scales, and you can bet coaches have already installed it. And if they haven’t, they should.