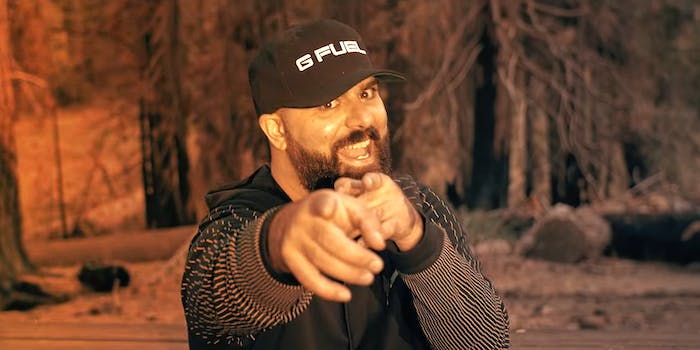 'All you do is break others down. Smh.'

Controversial YouTuber Keemstar stoked outrage once again on Sunday when he posted a sexist tweet about fellow content creator Pokimane.

Keemstar, born Daniel Keem, reports on gossip within the YouTube community on his DramaAlert channel. He appeared to offer his opinion on Pokimane’s physical appearance, tweeting, “Pokimane 2/10.”

Pokimane, born Imane Anys, has quickly scaled the ranks to become one of the most popular streamers on Twitch. She has frequently spoken out against the sexism she faces in the streaming industry, with critics claiming that fans watch her for her looks instead of her gameplay or personality. (She had a succinct clap-back for those haters on Saturday.)

Hundreds of Twitter users flooded Keemstar’s mentions following his Pokimane tweet, many of them slamming him for sharing an opinion he could have easily kept to himself.

“You’re the most toxic creator out there,” @ItzDiecies tweeted. “All you do is break others down. Smh.”

Many people also defended Poki in the comments.

“Imagine going after one of the top streamers who’s hella kind just to get content for a dying drama channel,” @Cowboyzfan0704 replied. “Poki is a 1000/10. Makeup or not she’s gorgeous, meanwhile keem looking like a bootleg garden gnome.”

Others couldn’t believe Keemstar would be willing to objectify female streamers when he has a young daughter himself.

“Imagine using your platform to publicly judge and tear down women,” @livbev tweeted at him.”What a horrible example you set. Would you want your daughter to be subjected to the same?”

This is far from Keemstar’s first online provocation. In 2019, Jake Paul called Keemstar a “piece of trash” and accused him of body-shaming when he compared Paul’s then-girlfriend Erika Costell to beauty vlogger Eugenia Cooney, who in 2019 told her YouTube followers about her struggle with an eating disorder.

Several Twitter users also blamed Keemstar for the suicide of YouTuber Etika after suggesting that Etika’s mental health issues were a publicity stunt during a DramaAlert interview.

Keemstar, who is a noted troll, followed up his initial Pokimane tweet by suggesting that he wasn’t rating her physical appearance. “Oops I was way off. Her birthday is May 14th… not Feb 10th,” he wrote.

Shortly thereafter, he tweeted, “Keemstar 10/10”—even though his birthday is March 8—petitioned for a Shane Dawson documentary, and criticized protesters for blocking traffic.