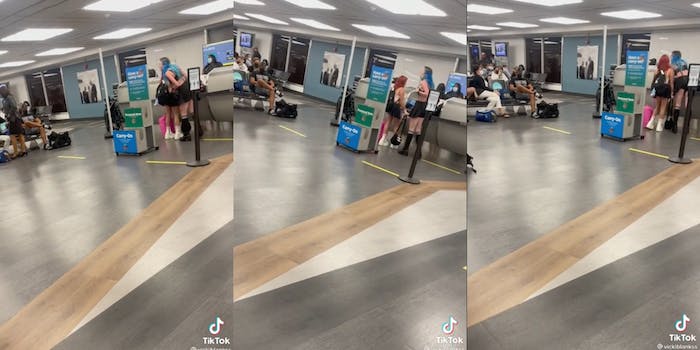 ‘Why can’t people just mind their own business’: Karen slut-shames two women at an airport in viral video

'Wow, people are so judgy just because we don’t look like all of you,' one of the women said.

Video footage shared in the subreddit r/PublicFreakout shows a woman dubbed a “Karen” start a shouting match with two women about how they were dressed at an airport. The original video was uploaded to TikTok but appears to have been deleted. It’s unclear which airport this incident took place in, and the identities of the people involved are unknown.

It’s unclear what originally prompted the altercation between the women, but the beginning of the footage shows the three women already mid-argument.

One of the women can be heard yelling at the Karen, “Oh you must be really attracted to my ass if you’re checking it out.”

Then the Karen said something unintelligible from the video about the woman’s ass and told her “you’re the one without the tits.”

Posted by Reddit user u/sleepbeep, the video has received over 6,000 upvotes and almost one thousand comments.

“Why can’t people just mind their own business… It’s not difficult,” one redditor commented. Another user replied, “Really takes stress off of you too. You can just worry about yourself and nothing else. I got enough crap I gotta deal with every day. I don’t have the physical or emotional energy to worry about how another person dresses.”

The woman snapped back, saying the Karen shouldn’t bash her for having small breasts and stating she’s happy with her body. Several bystanders clapped loudly for her.

The Karen and women continued shouting back and forth, and the Karen called them “dumbass” while someone else called them prostitutes.

“Wow, people are so judgy just because we don’t look like all of you basic bitches,” one of the women said.

“Thank God,” the Karen replied sarcastically. But the woman snapped back, “Yeah, thank God I’m not basic as fuck.”

Then the Karen told her “you’re not nothing,” but it’s unclear if she meant to use a double negative or if she meant that the woman is actually nothing.

But according to the woman, she’s worth a lot, as she claims to make $40,000 per month. As if it were the only explanation for such income, the Karen asked her if she was a prostitute.

“No, I ain’t no prostitute. I don’t sell my pussy,” the woman shouted. “But everyone fucking loves to look at my titties. They pay thousands of dollars for it.”

Some viewers were shocked at how much money the woman claims to make, while others were eagerly waiting for her to drop an OnlyFans username—which she did not.

“I was waiting for her to drop her OF page…pencil and pad at the ready,” one viewer commented.

“Shit 40K a month, just hire me to deal with the people, I’ll stick something in their butt,” another person said.

Several viewers shamed the Karen for sticking her nose in the younger women’s business, while a few also said the woman shouldn’t have shouted about her possible OnlyFans.

“Scumbags have a hard time liking themselves, thus they prefer to shit on others,” one viewer commented about the Karen. Another said, “Older women are the biggest slut shamers of young women in particular.”

Someone else wrote, “They are all so dumb. I wish everyone would shut up! These public outbursts are embarrassing for everyone involved. I mean I’m clearly on the young people side, but she didn’t need to tell her about people paying to see her naked. Why tell her anything? It changed nothing.”