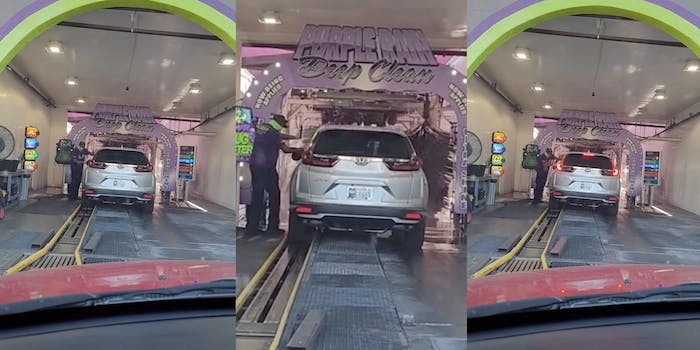 'Rumor has it she is still in there.'

There are a lot of complicated tasks we are confronted with upon reaching adulthood. Many of these undertakings, like filing taxes, purchasing a home, or working a consistent job, can be complicated and challenging. Using a carwash, however, is rarely counted among challenging adulthood tasks—for most people, at least. A recent TikTok video shows that a carwash can be a hurdle to some adults after a Karen found herself struggling with the most basic carwash instructions.

Uploaded by user @poisoned_hearts on Aug. 23, the TikTok went promptly viral. Within 24 hours, it has earned more than 600,000 views and tens of thousands of likes from amused and baffled viewers. The video is filmed from within @poisoned_hearts’—who goes by Erik M on the platform—car, while he sits at the entrance to a Las Vegas carwash and watches the drama unfold.

According to Erik, the woman earned the moniker of “Karen” before the camera started rolling. As the attendant was explaining the process behind the carwash, Erik says the woman “yelled at him that she didn’t need him to tell her how to do this.” She was very wrong, however, as the video quickly reveals.

Karen is a car length ahead of Erik when the video begins. The attendant is situated at her window, explaining—for the third time, according to Erik—that she simply needs to put her car in neutral and let the carwash do the rest. There is even a handy sign, complete with pictures, directly behind the attendant to help make instructions clear.

The specifications are apparently not enough, as the Karen—immediately after being told that she simply needs to relax and let the carwash do its thing—begins hitting her brakes to stop the automatic belt from pulling her in. This forces the attendant to stop the process and return to her window, where he appears to repeat his instructions yet again. His explanation falls short for a likely frustrated Karen, who attempts to ignore the carwash’s design and simply drive forward.

She nearly makes it in before the attendant stops her, yet again, and tries for a fifth time to explain the way a carwash works. After a thorough explanation, the attendant steps back and starts the process yet again.

The fifth time is apparently the charm, as the attendant’s explanation finally hits home, and the final moments of the video see Karen successfully swept away into the carwash. Erik lets out an amused chuckle as he moves forward to take his position at the entrance to the Purple Rain deep clean station.

The Karen never makes a showing on camera, but that didn’t stop people from dragging her in the comments. A number of people found themselves wondering how “people like this [have] survived so long?”

“Some people shouldn’t have licenses,” one commenter proclaimed.

Thankfully, the Karen’s tenuous grasp of how to carwash didn’t put herself or anyone else in danger. She did, according to Erik, get a bit impatient toward the end of the process, however, and ended up jumping the track. She “missed the dry stage completely,” according to a followup comment from Erik, but ultimately drove away with a reasonably clean car. Unless you believe commenter Olivia, who noted that “rumor has it she is still in there.”

Update 9:08am CT Aug. 25: When reached for comment, Erik told the Daily Dot that he “started recording when I heard the woman yelling at the attendant not to tell her how to drive through.” Erik said he “thought maybe she was going to try and get the attendant in trouble with management and I wanted proof for them that Karen was in the wrong.”