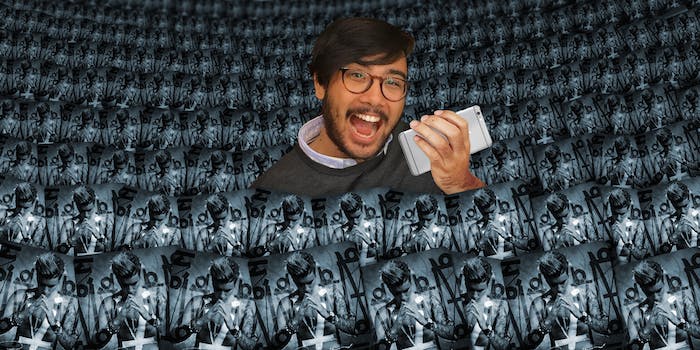 Justin Bieber’s “Love Yourself” played from the radio. My mom had just picked me up from my grandma’s house, and we were on our way to my uncle’s place to pick up the car I would use during my visit home to California. As we were cruising down the road, Biebs’ croons waft from out of the speakers, and my mom told me something momentous:

I chuckled and let her know that it’s nothing to be ashamed of, as it’s generally agreed that Bieber’s latest album is lit af. “What Do You Mean?” is a banger, nobody can resist getting down to “Sorry,” and there’s just something damn infectious about “Love Yourself.” Purpose was a successful comeback in every way.

But maybe my mom felt a little embarrassed about enjoying a musician largely known for his legion of teen fans—Beliebers. Or perhaps she’s sort in the same camp as me: totally into his music but still iffy about him as a public figure, given some of the messed up shit he’s done to earn the title of “fuckboi” in my eyes.

Either way, my mother’s confession made me glad to be home. And being the #millennial that I am, I shared the moment on social media. Prime mom content, you know? I looked forward to my little sister eventually seeing the tweet and reveling in our parent’s candor.

Little did I know that my Twitter mentions would soon be pummeled by the power of Beliebing.

I put my phone away after tweeting the above and didn’t end up looking at it for a couple of minutes (I had stumbled upon my old Razr knockoff, which ended up in my cousins’ backyard, and was marveling at Pokémon stickers still intact from a 3rd-grade decoration session). But when I pulled my phone back out and saw the avalanche of Twitter notifications, I let out an astonished “oh my gosh.”

Beliebers were going gaga, liking, retweeting, and throwing me the occasional follow. It was a Belieber barrage. It wasn’t as if I’d even tagged @JustinBieber, or caught a trending topic. I’m not sure which Belieber was first to engage with the tweet, but I’m guessing one must have just been searching “Justin Bieber” on Twitter—or maybe they get Google Alerts—and from that moment, it was on its way to worship by countless other Beliebers on Twitter. This is one of my most popular tweets by far, having racked up over 700 retweets and 800 likes.

Bieber himself has 76 million followers—millions more than some of your everyday celebrities. His personal tweets get tens of thousands of hearts and RTs for merely existing; his retweets ensure massive attention for their sources. This is the dude who found a girl by putting a call out for help from his Instagram cronies. And while Bieber himself is unlikely to ever see or acknowledge my tweet, his diehard fans went to town with it.

The likes of @RAUHLSBABE4EV3R, @hudsonxbieber, @kami___bieber, @yoloxbieber, and similar handles accelerated the tweet’s exploding popularity. Display names and Twitter bios that promoted Bieber’s Purpose or noted when the musician finally followed back consumed my notifications. Some people had avatars of themselves, but many featured various Biebers. Pouty-lipped Bieber, Calvin Klein-clad Bieber, shirtless and buff and making-me-somewhat-attracted-to-him Bieber. There were personal Twitter accounts, ones that looked like Bieber bots, and many that just looked like dedicated fan profiles.

Some users professed their love for my mom—she was actually cool in their eyes. 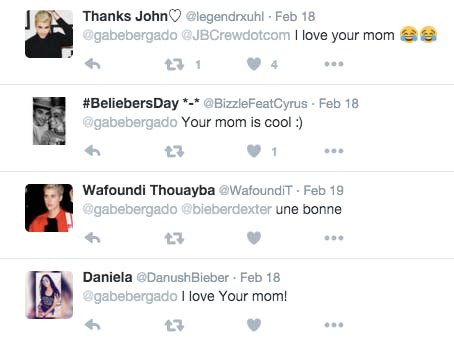 Other Twitter accounts, most likely bots, used the tweet to advance their own advertising: @stickydildo let me know that if I wanted a DM from the tattooed Canadian himself, I could check their profile to find out how. 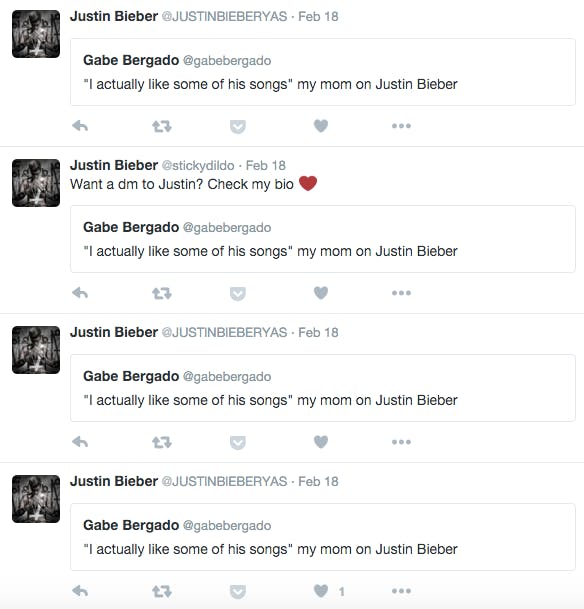 Back in 2014, Kurt Wagner wrote about an experience similar to mine. He was followed by none other than the Biebs himself, only to see more than 150 Beliebers copy their idol’s actions and follow him within 24 hours.

The flare that tipped Beliebers off on Wagner is the mere fact that Bieber started following the reporter. It’s like when the popular kid in school talks to someone new: All of the underlings who follow the popular kid’s every move do likewise.

But without an official endorsement, it all comes down to what you say—and not just any mention of Bieber on the Internet will lead his admirers to lovingly swarm you Twitter. I somehow tugged at the heartstrings of these Beliebers. Most people have a mom, and I’m guessing many of these Beliebers are in a “my parents don’t understand me!” phase. So when they hear that a mom is on their side, praising someone they so fanatically treasure, they can’t help but be overjoyed.

As for my mom’s take on all this: “I’m helping you get attention!”