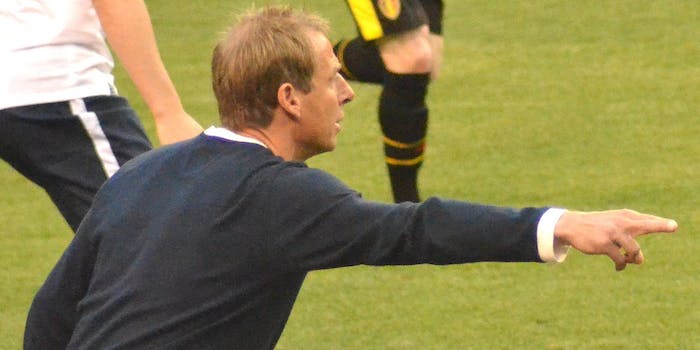 I believe that we won't get fired!

Today’s highly anticipated World Cup game that finds the U.S. facing off against Germany for a spot in the Round of 16 falls right in the middle of the work day for all 9-5 Americans, blue and white collar alike. Instead of having to minimize your livestream every time your boss walks by or fighting to take an extra long lunch break with every other sports fanatic in the office, play it cool by handing in a note written by Jurgen Klinsmann himself.

On Wednesday evening, the U.S. Men’s head coach sent out a form letter via Twitter and Facebook excusing any patriotic, sports-loving American that wants to see their national team advance.

Need note to get out of work Thurs? @J_Klinsmann has you covered. Show your cool boss. It will def work! #LetsDoThis pic.twitter.com/i2oCZmGAGZ

Print it out, hand it over, and go grab a seat in front of a big screen to cheer on the team. After all, you wouldn’t wanna miss Will Ferrell biting every member of the German team, would you?