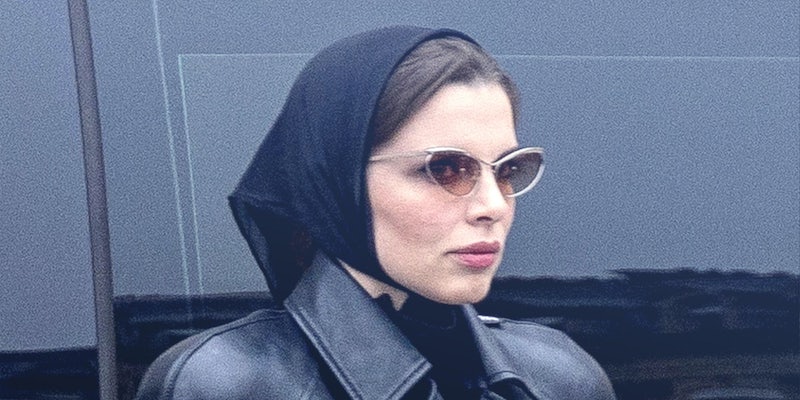 ‘Only when a white girl wears it’: Vogue France accused of hypocrisy over Julia Fox headscarf photo

The Vogue brand is no stranger to racism controversies. Prompted by an Instagram photo of actress Julia Fox, the latest example relates to France’s ban on Muslim head-coverings.

The post in question features a gallery of four Julia Fox photos, the first of which shows her wearing a black leather coat and a black headscarf. The original caption (which has now been edited) began with the phrase “Yes to the headscarf!”

Vogue France probably intended to capitalize on the attention-grabbing nature of Fox’s relationship with Kanye West. However, the response from readers was much more negative, with commenters accusing Vogue of hypocrisy in the context of French political campaigns against Muslim headscarves. This controversy soon spread to Twitter as well:

There’s a strong anti-Muslim sentiment in France, leading to recurring public campaigns against Muslim women wearing veils and head-coverings. In 2004, the French parliament implemented a ban on students wearing religious items in school. Nicknamed the “veil law,” it technically covers all religions, but it was widely perceived as a piece of anti-Muslim legislation.

As of 2010, France banned all full-face coverings in public spaces, a law that covers balaclavas and helmets alongside religious attire such as the niqāb. This law continued into the Covid-19 pandemic, leading to further accusations of islamophobic discrimination among French lawmakers. If the general public were being told to cover their faces for health reasons, why were Muslim women being specifically penalized for religious face-coverings?

Last year, the French senate put forward a bill banning under-18s from wearing hijabs in public, and in January 2022, they banned women from wearing hijabs in sporting competitions. All this is to say that headscarves are a hot-button issue in France, so Vogue‘s Instagram post came across as pretty tone-deaf.

People aren’t angry at Julia Fox herself or accusing her of cultural appropriation. The backlash is aimed squarely at Vogue France, and at France’s political climate at large. There’s a prevailing sense that Vogue would rather celebrate a white non-Muslim woman than a Muslim woman wearing exactly the same item of clothing.

While Vogue France removed the original “Yes to the headscarf!” caption, the post’s comments section is full of Instagram users—many of them Muslim women—criticizing and deriding the magazine with comments like, “Only when a white girl wears it…” and “The irony of vogue France promoting a ‘headscarf’ on a white woman while Muslim women in Hijabs are banned from public life.”

“How can you post about the headscarf on a white woman but have it banned in your country for muslim women???” wrote another frustrated commenter.

In recent years, the Vogue media empire has attempted to diversify its staff and editorial output, with mixed results. In 2018, Halima Aden became the first hijabi model to be featured on the cover of British Vogue—although she quit her career two years later, describing the fashion industry as “exploitative.”. Meanwhile, Muslim model Rawdah Mohamed (who spoke out against France’s hijab ban) is now a fashion editor for Vogue Scandinavia. This week’s furor around the Julia Fox Instagram post suggests that Vogue France still has a way to go.