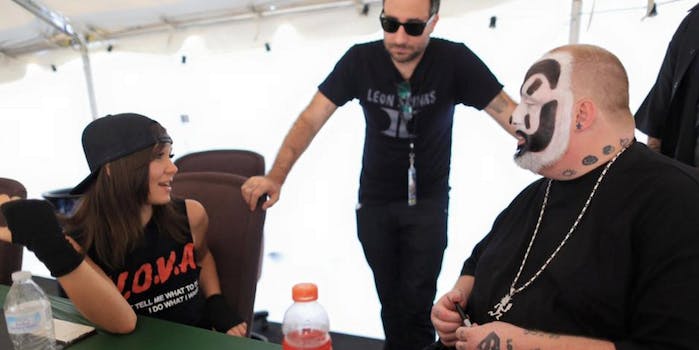 Guys, everything is OK: There is some authenticity left on the Internet.

Going viral is tantalizing, and it makes us hungry, if not desperate. So when I discovered a Facebook page called Juggalos for Bernie, I naturally expected the admin to be some distant wiseass beating a tired joke into the ground for a few social followers and coverage on Daily Dot.

I did not expect to find a true, Faygo-swilling Juggalette college student maintaining the page for likeminded members of her clown community. She and others in the Insane Clown Posse “family” truly believe in Bernie Sanders. That’s awesome. She’s awesome.

In its two months of existence, Juggalos for Bernie has racked up over 1,000 likes—and suffered from some significant, totally obnoxious trolling. We talked about those struggles, as well as why Senator Sanders’ social democratic values appeals to the more populist Juggalos of the world.

First things first, tell me about yourself. What’s your name? Where are you from? What do you do for a living?

My name is Ham and I’m originally from Western Kentucky but currently residing in Southern Illinois. I don’t really “do” anything for a living right now, I’m just a student at Southern Illinois University at the moment. I am a student worker if that counts for anything.

How long have you been a Juggalo?

My career as a Juggalo has been a short one. I would say I’ve had my official Juggalo card for maybe two years. It’s not on the books so you just have to trust me on that one. I feel weird but kinda honored to be a spokeswoman for such a large and lively family. Especially since I haven’t been a part of it for too long. But hey… I’m trying.

What was the inspiration to start this page? Do you know other Juggalos who are feelin’ the Bern?

You’ve gotten a lot of followers in a short amount of time. Is that surprising to you?

It was overwhelming. I never knew I would get such a large turnout in a small amount of time. I’ve noticed a lot of people that like the page aren’t affiliated with the Juggalo community, but really just want to be involved with anything Bernie. I love that.

Have there been any trolls on the page, or have people been well-behaved?

I’ve had a few people say some shitty things. I try to counteract any trolls with humor. Fans of the page know how to handle any negativity that the page gets. It’s a Juggalos for Bernie Sanders page, it’s bound to happen. It’s the way you handle it that matters. A lot of talk of Juggalos not being employed and just drinking Faygo. Fuck off with the stereotypes. Juggalos were founded on embracing living in poverty-stricken areas of America, because what else were you going to do? Fight the politicians? We’re fighting for a politician now. That’s why we’re for Bernie.

I feel like most people would expect Juggalos to vote for, say, Donald Trump. But you obviously love Bernie. Do you think there’s a sizable part of the Juggalo community that vibes with Bernie’s social democratic views? Are there socialist Juggalos out there?

Bernie Sanders is an old “socialist” Jew that’s running for President of the United States of America. He ran as an independent most of his career. He’s an outsider. He knows the communities that the Juggalo family has been raised in for years. I would say socialist Juggalos are out there, it’s definitely a possibility. I consider myself a socialist Juggalo, but I can’t speak for the rest of my family.

Last but not least, who will you vote for if Bernie doesn’t get the nomination?

I’m a Juggalette, so seeing a woman in office would be pretty killer, but Clinton is a shady bitch. I don’t trust her. I can’t vote for any of the Republican nominees without feeling like I’ve personally destroyed America. I don’t know I can’t answer that right now. Only time will tell.

Photo via Juggalos for Bernie/Facebook