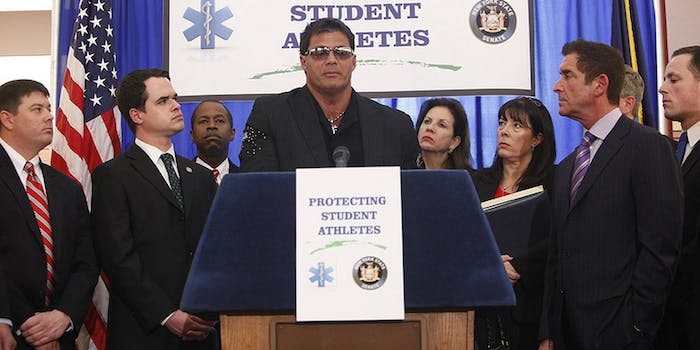 Has the disgraced baseball slugger finally crossed the line on Twitter?

That’s certainly one way to get in front of bad press.

Former MLB star Jose Canseco—whose popular Twitter account is full of off-color jokes, typos, and aimless feuds with other celebrities like Shaq and Donald Trump—tweeted today that police had shown up at his house and charged him with raping a fitness model and instructor in Las Vegas. He wrote on Twitter that the woman is accusing him of sexual assault and that Las Vegas police are considering him a suspect.

Claiming his innocence—and to the outrage of Twitter feminists—Canseco then posted his accuser’s name, photo, the gym where she works out, and her telephone number. 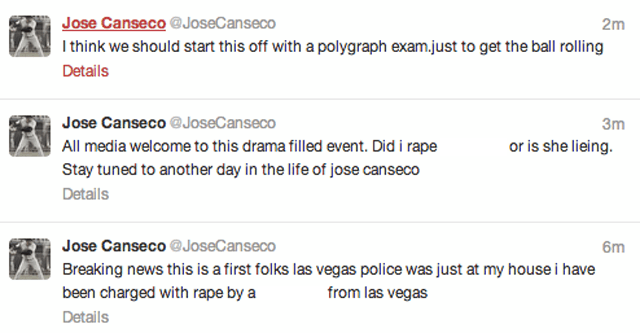 This isn’t the first time Canseco has tweeted personal information. Earlier this month he shared (and quickly deleted) a phone number reportedly belonging to his ex-girlfriend, Leila Shennib, who referred to as “skank thief.”

On Wednesday, the former baseball slugger denied the allegations that he drugged and raped his accuser, tweeting: “Breaking news this is a first folks las vegas police was just at my house i have been charged with rape by a **** from las vegas” [sic] and “All media welcome to this drama filled event. Did i rape **** or is she lieing. Stay tuned to another day in the life of jose canseco” [sic].

He then suggested police look into a polygraph test for both him and his accuser. About two hours ago, the current United League player tweeted, “Lets play truth or dare. I dare **** to tell the truth.” 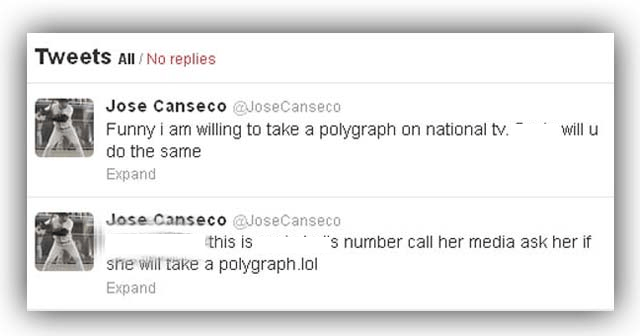 It’s a highly unusual move. Even if a victim’s name and photos are readily available elsewhere online, respectable news organizations, as a general rule, do not disclose the names of sexual assault and rape victims unless given express permission. The idea is that the publicity will further traumatize the accuser and will shame and frighten future victims away from speaking out. Some media outlets have also been running with the woman’s name and photo, but most (like the AP and Yahoo) are blacking it out.

In a 2011 article in the Atlanta Journal Constitution, University of Southern California journalism professor Geneva Overholser argued that the press should not withhold the names of alleged victims of sexual assault.

“We value name identification in journalism for all kinds of reasons—accuracy and verifiability prime among them—and we should not exempt only these adult victims of crime,” Overholser said. “Second, we are not in a position to judge guilt or innocence, which we imply when we ‘protect’ one party … but name the other. … Third, it has become virtually meaningless in the digital era to offer this ‘protection’ since facts will come out.”

Canseco and Overholser are of the same mind as a lot of men’s rights activists—that in cases of rape and sexual assault, accusers (who might be lying) should have to face the same scrutiny as suspects. Only in this instance, Canseco is potentially subjecting this woman to his large social media audience—something, as a non-celebrity, she presumably doesn’t have. If he is innocent, he’s not helping his case by being a vigilante.

Feminists on Twitter, including activist Lauren Rankin and organizer Shelby Knox, have also been calling for people to report Canseco for violating Twitter’s rules, which state that a user can be banned for posting someone else’s phone number. On Twitter, Rankin said Canseco has potentially endangered his accuser’s life by giving out information about her online. Knox wrote that women are protected from being identified because they already face victim-blaming and threats when reporting rape. Canseco has since deleted his accuser’s phone number, but her name remains on his Twitter timeline.

Canseco has been in trouble with the law before, as an admitted illegal steroid user and, in 2002, when he and his brother, Ozzie, both pleaded guilty to assault in a Miami nightclub. Canseco received three years’ probation.