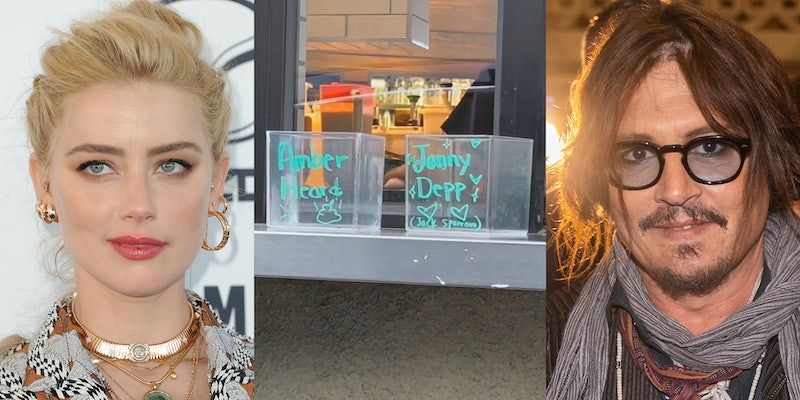 Normally, dueling tip jars at coffee shops like Starbucks give people an incentive to vote with their money while also tipping their baristas. Sometimes, the contest can be between something as innocuous as dogs vs. cats or they might try to lean into current events, such as the two tip jars labeled “Kanye West” and “Pete Davidson” that showed up at a Starbucks a couple of months ago.

In a clear case of the latter, several tip jars are urging people to choose between Johnny Depp and Amber Heard due to the defamation trial that the ex-spouses are in the middle of, where Depp is suing Heard for $50 million because of an op-ed where she talked about being a victim of domestic abuse.

A few days ago, TikToker @valeria__amor posted a video showing two tip jars at a Starbucks drive-thru. Written in green ink, one of them featured Depp’s name misspelled with one of his most famous roles, Jack Sparrow, written in parentheses; his name was surrounded by stars and hearts. The container featuring Heard’s name included a frowning face and a drawing of poop, a likely nod to a name that Depp called Heard after an argument (and has trended on Twitter during this trial). You can hear someone say “Go Johnny!” after a dollar is placed in Depp’s jar.

A second video, which was posted a couple of days later, shows slightly different options for its tip jars. Depp’s name, as well as Jack Sparrow’s, is still written on one jar, except this time it’s in green. But now to its left is “Chris Rock (Marty)” instead of Heard’s name.

“Guys, they changed it,” the driver said after driving up to the window. “They put Chris Rock (Marty) and then put Johnny Depp. But I still got Johnny Depp, there it is. But they changed Amber.”

People pointed out that the dollar in Depp’s tip jar wasn’t hers because it was a different day and baristas collect tips at the end of each day. But there was a much more likely reason that Heard’s name disappeared from the jar.

“I work at Starbucks,” @jayybae03 commented. “We can’t put anything controversial like the Johnny vs amber case [on tip jars] Bc of policy. We did Pete vs Kanye and had to change it.”

But @valeria__amor was far from the only person posting TikToks of Starbucks tip jars pitting Depp against Heard. Several more people posted their own coffee runs, and more than one is set to the main Pirates of the Caribbean theme.

“One for Johnny!” a woman says in Summer Canova’s video after directing the barista to put her dollar in Depp’s jar. There are several dollars in Depp’s jar while Heard’s is empty. (These jars only had the actors’ names written on them and no indication of famous roles or insulting names.)

“Support Your Local Starbucks Baristas and vote for Johnny Depp!” @oss_tee wrote in the caption of a TikTok where a barista is directed to place the tip in Depp’s jar. In this case, Depp’s name is accompanied by stars and hearts while Heard’s has an illustration of poop next to her name.

“So I went to Starbucks today and this is what I saw at their drive thru window,” @n3idy wrote. “Johnny depp all the way.”

Another added: “Why y’all making bets on an abuse case?”

And in another video, Heard’s tip jar includes comments that “she stinks!” and “booo” written next to her name while Depp’s has hearts around his.

But while it’s unclear just how widespread the dueling tip jars for Heard and Depp are, many of the videos are showing one thing: The ones with Depp’s name had far more money in them.