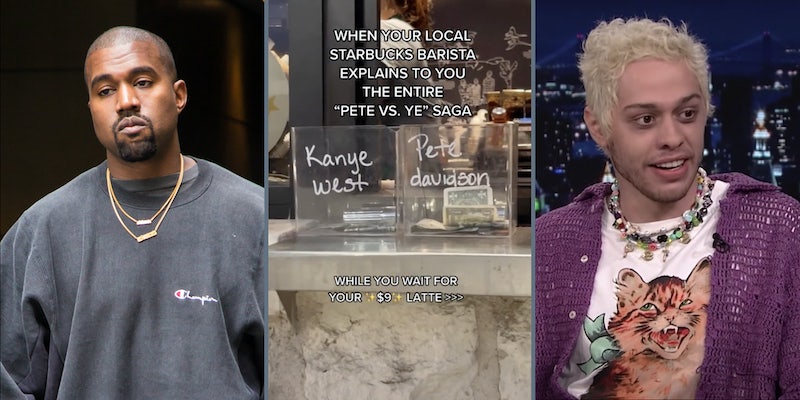 ‘They need a box for Kim. F these 2’: Starbucks workers leave out Pete Davidson and Kanye West tip jars in viral TikTok

It's unclear how much money the workers made, but it looks like the Pete jar won out.

TikTok user @shopjadelynnbrooke posted the video, captioning it, “Are you team Pete or team Ye?” But according to the video’s on-screen text, a Starbucks barista had to explain “the entire Pete vs. Ye saga” to the TikToker.

The so-called saga has involved a whirlwind of social media posts by Ye, the artist largely known as Kanye West, that targeted his estranged wife Kim Kardashian and her boyfriend, Saturday Night Live comedian Pete Davidson.

The rapper shared various out-of-context or poorly cropped screenshots of text conversations, including a conversation with Kardashian, who told Ye he was “creating a dangerous and scary environment,” according to the Daily Mail.

That’s only a small part of the “Pete vs. Ye saga,” so there’s no telling how much the Starbucks barista was able to tell the TikToker. It’s unclear how much money the workers made with the tip battle. Regardless, their video received 1.1 million views on TikTok as of Saturday, and viewers were divided on which celebrity they support.

“I think Pete got this one,” one viewer commented on the video, possibly referencing the larger number of bills seen in the jar labeled “Pete Davidson.”

“Pete! Like there is even a question!” another viewer commented.

Ye’s fans were just as vocal, though, and stood by the rapper amid the controversy.

“Ye for the win,” one TikToker wrote.

Another user argued, “Kanye. Nothing wrong with a man fighting for his family. He’s not a perfect man but everyone has their own demons. His are visible while other [hidden]”

Many viewers voiced a sentiment that’s been echoed across the internet all week—that Ye’s behavior is not funny, but harassment.

“Since what kanye is doing is abusive and not funny, I’d say Pete,” one viewer commented.

Someone else wrote, “Pete all the way. Kanye needs some serious help… praying for him and his family.”

Another viewer said, “It’s scary the amount of people who don’t see anything wrong with what Kanye is doing simply because they’re his fans.”

Others were uninterested in the beef between the two men. Instead, they lent their support to Kardashian and the West children amid the messy divorce proceedings.

“I’m Team Kanye’s kids bc they don’t deserve this nonsense,” another said.