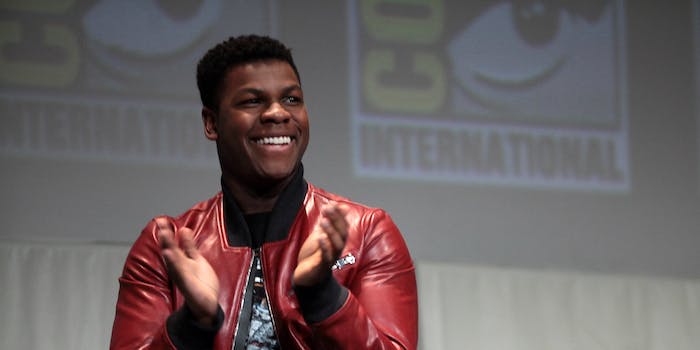 He spoke with producer Kathleen Kennedy about his experiences behind the scenes.

In the months since his final Star Wars appearance, John Boyega has grown more outspoken about his discomfort with the franchise. As the first Black lead in Star Wars, he had a groundbreaking role that earned him ample harassment from racist trolls. And as Finn’s character arc was sidelined in later movies, he became an example of how Hollywood struggles to champion Black talent.

“They gave all the nuance to Adam Driver, all the nuance to Daisy Ridley,” Boyega told GQ earlier this year, a rare example of a famous actor speaking out against an A-list Hollywood franchise. Fortunately, it sounds like the people behind Star Wars are willing to listen to criticism.

Speaking to the BBC this week, Boyega said that he’d spoken to producer and Lucasfilm president Kathleen Kennedy about his ambivalent experiences playing Finn. He also made it clear that this isn’t a case of him complaining about his role; he wants to make sure that other actors of color have an easier time than he did.

“I think these kinds of conversations, you can go into the realm of sounding like you’re just trying to save your own career, but what is great now is that it is a conversation that anyone has access to,” Boyega said. “Now people can express themselves about this, knowing that any character we love, especially in these big franchises like the Marvels and Star Wars, we love them because of the moments that they are given.”

He emphasized that more of those “heroic moments” need to go to non-white characters, describing his conversation with Kennedy as “nice, transparent, honest” and “beneficial to us both.”

Boyega currently stars in Red, White and Blue, one of five new movies directed by 12 Years a Slave filmmaker Steve McQueen. These films depict the British-Caribbean community in late-20th century London, and several of their stories focus on racial injustice. It’s no surprise that Boyega’s Star Wars experiences came up during the film’s promotional tour, along with his powerful speech during this summer’s Black Lives Matter protests.

By going public with his criticisms of Star Wars and Disney, Boyega confirmed what many fans already suspected: He and Kelly Marie Tran didn’t receive equal treatment to their white co-stars, either onscreen or in real life. Speaking up was a risky move, and Boyega faced the possibility that after criticizing Disney (and speaking out against racism in general), his career might suffer. The fact that Kennedy listened to his comments is hopefully a positive sign, suggesting that the studio will try to prevent this from happening again.