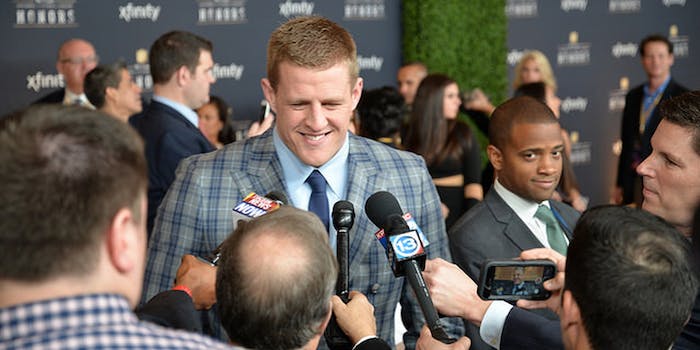 Help J.J. Watt find his hero of the moment. A 12-year-old boy who set Houston on fire with an unreal anthem.

Sometimes when you sing the national anthem at a sporting event, you get the kind of polite applause from the crowd who just wants to move on to the game they’re about to watch. And sometimes, if you’ve really belted it out of the park, the best defensive player in the NFL storms out of the crowd to give you congratulations.

The latter is what happened for 12-year-old Nicholas Connors, who delivered a fantastic rendition the Star-Spangled Banner at Tuesday night’s playoff game between the Houston Rockets and Dallas Mavericks. And guess who emerged onto the court to give him a hug? Houston Texans defensive end J.J. Watt.

Check out 12-year-old Connors’ rendition of the national anthem  It was pretty damn amazing.

And his reaction to Watt’s reaction.

Could y'all help me get in contact with Nicholas? He dominated the national anthem last night. https://t.co/bcu48d4kJA

No word yet on whether Watt has found his man. But until then, Watt has three choices.

He can either dance with a fox after a Rockets victory…

… Talk to one of his buddies from outer space.

Just spent 45 minutes speaking with @AstroTerry who is up in the International Space Station. Absolutely incredible. pic.twitter.com/6XAZwNJeAa

… Or almost, but not quite jump on a really tall box.