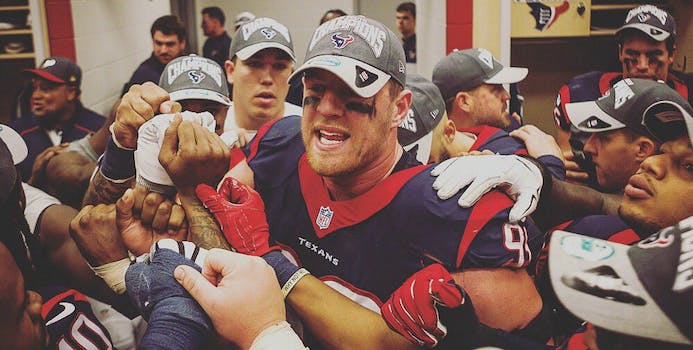 Breakfast food, for one.

Watt is fiery on the football field, and he’s apparently just as passionate about what you put in your face after you’ve just risen from slumber.

Breakfast for any meal, any time of the day. Bacon & Eggs are good at any hour.

I go to bed looking forward to breakfast. Goodnight world. Dream of breakfast burritos, biscuits & gravy and anything with bacon.

It actually sounds like Watt will fight you if you disagree with him. But breakfast isn’t his only passion. Watt likes a lot of things, and he’s not afraid to show it. Aside from breakfast food, here are nine things he adores—and if you don’t love them as well, you’d better beware.

If you don’t enjoy puppies, Watt is going to put down the puppy he’s cradling in his arms and then bash you in the forehead.

I mean, it's a puppy… Who doesn't love puppies. Let's be serious here. https://t.co/yzCL7dUAPJ

Watt apparently has always had a crush on the actress. And if you don’t feel the same way, he’s going to crush you.

I'm not even going to try to pretend like I acted cool when this happened. #LifeMade pic.twitter.com/ezGyWWJG0a

In this case, Watt was wrong. Instead, Rousey was the one to take a beating from Holly Holm.

When someone asks who's going to win the fight tonight. #andSTILL pic.twitter.com/ORPjs3YDiM

And if you prefer Pizza Hut or Domino’s instead, take a hard look at the following video. No matter how much those quarterbacks were hurt by Watt, he’s going to make it a hundred times worse for you.

And probably the movie Elf. And if you don’t care for either, Watt will hit you so hard in the stomach that you’ll be tossing your milk and cookies for weeks.

Not down with taking a mid-day snooze? Watt will make sure to put you to sleep.

Naps are a thing always. At all times. https://t.co/uFDHkepaXW

Zach Morris had better not get in his way.

This. Is. Awesome. #MindBlown https://t.co/ZhVa8PdSE2

@justinjames99 I heard you were looking for me. I'm in LA catching up on my reading. Btw, good game today. #houstonismysecondhome

Watt is passionate about showing his passion for you. And if you happen to get locked in an embrace with the best defensive player in the NFL, he may never let you go, causing your death by sensual strangulation.

That, by the way, is Watt’s mom. She did not survive.

Sending love your way – Happy Valentine's Day to our supporters & thanks for showing us the love all year long! pic.twitter.com/AesC5Lt8eP