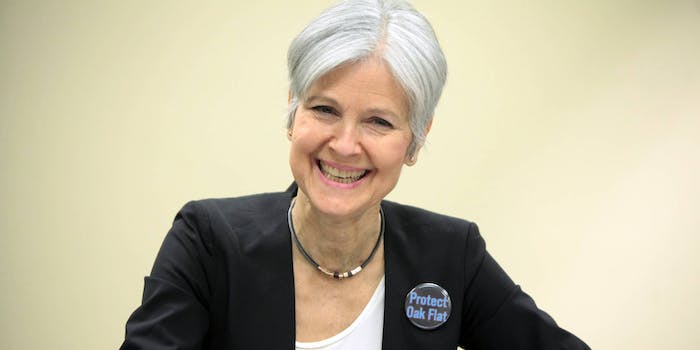 Green Party presidential candidate Jill Stein is shedding some light on her own dank memes. Stein, who was virtually tied with a meme in a recent, actual poll, discovered Jill Stein dank memes and she (or the staff members who run her Twitter account) got such a kick out of them that she had to pass them along.

The people who brought you this dank meme that made me giggle are now on Twitter. Follow @DankJillMemes! pic.twitter.com/eeTovUZDt9

Clinton gave her stamp of approval on “Texts From Hillary” four years ago and effectively killed the meme, but now meme endorsement is the best thing someone running for office can do. After all, it’s now the media—and not the candidate—that kill memes.

@DankJillMemes, which calls itself the “Sister account to the Jill Stein Dank Meme Stash on Facebook,” has only been online for a little more than two weeks, but it’s already posting plenty of memes to its growing list of followers.

Some of them attack Trump, but Stein’s dank memes are mostly directed toward Clinton.

Trying to get Hillbots to take off their blinders. https://t.co/oDx1v6Z1wp

It even invoked political rival and meme Harambe in the process.

She’s not at 15 percent just yet but she could possibly win over the Weird Twitter and Facebook vote—and thus turn her chance to debate into a meme-able appearance.

Between Stein’s love of her own dank memes, Pepe the Frog’s presence at a recent Hillary Clinton rally, and the real-life shout out for the “Ted Cruz is the Zodiac Killer” meme, 2016 may very well become the dank meme election.