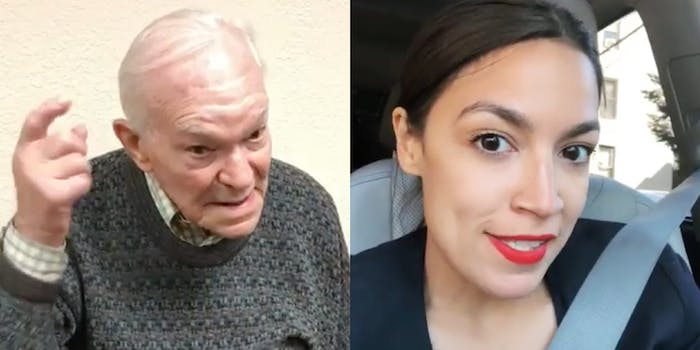 The New York congresswomen has some very talented fans.

Rep. Alexandria Ocasio-Cortez (D-N.Y.) has a dedicated fanbase that seems to keep growing—older, that is. One of her biggest fans is 97-year-old Jerry Rosenblum, who on Saturday shared an Instagram video of himself singing a song he wrote for the New York congresswomen.

“I was very happy to hear @ocasio2018 enjoyed the song I wrote for her last year during her campaign and I decided to write another song,” Rosenblum wrote on Instagram. “I hope you enjoy and I hope @ocasio2018 sees this post.”

In the video, Rosenblum praises Ocasio-Cortez’s “never quit attitude” and predicts she’ll be president one day. He previously recorded a video for her in October and says he began writing his latest tune two months ago.

2 months ago I started to write the lyrics to the song for Alexandria @AOC , I am beyond words knowing that she saw it and reposted it ! pic.twitter.com/acMUGqtKQZ

“We need a Green New Deal to save our planet for sure,” he sings in his latest video, urging people to support the congresswomen in her efforts to pass the deal. “Lots of sun and wind power will help us endure.”

On Sunday, Ocasio-Cortez responded to the song in a tweet. “Jerry is 97 years old and dedicates his Instagram to spreading joy and acts of kindness,” she wrote. “This is his second song of support, and he writes them himself!”

Jerry’s back with a new song! 😭 pic.twitter.com/pgn1YQ02tW

The Green New Deal has proved itself to be controversial since Ocasio-Cortez and Sen. Edward Markey (D-Mass.) proposed it last year. The deal calls on the government to create legislation to help reduce greenhouse gas emissions, guarantee healthcare, and boost the usage of renewable energy.

Republicans have been very outspoken against the proposal, with many deeming it too “socialist.” Some members of the Democratic party say hte proposal is unrealistic.

But many, like Rosenblum, believe in the message of the Green New Deal and believe it is imperative for the future of this country.

“Alexandria, I’m one of your biggest (and oldest) fans and I’m so impressed by all you have accomplished at such a young age,” he wrote on his original Instagram post. “We need women like you leading this country!”