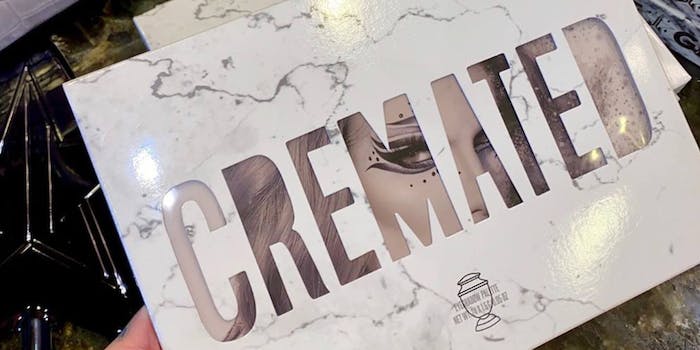 He announced it as the world experiences the worst pandemic in a century.

After naming his latest eyeshadow palette “Cremated,” Jeffree Star is being slammed, praised, and shamed on Twitter. The name, many users say, is in poor taste considering the world is currently experiencing the worst pandemic in a century.

The launch was intended to be released in April but was delayed due to the coronavirus.

Star announced the palette with a post to his Instagram account, saying that it wouldn’t be for rainbow-lovers, hinting at a range of what could possibly be charcoal hues, given the name.

“Introducing the #CREMATED eyeshadow palette & collection!!!!” Star wrote. “This one of a kind spooky @jeffreestarcosmetics 24 pan gothic dream will wake up the makeup world! The FULL reveal video will be on my channel TOMORROW morning!!!! Get ready to be deceased. Extreme payoff. With our iconic mattes & new extreme sparkle metallic formula.”

The announcement resulted in comments split into camps of people who are excited and others who are rubbed the wrong way by the palette’s name.

“I mean far be it from me to tell anyone how to name their products,” Twitter user @mrharley87 wrote. “But @JeffreeStar I think you picked a bad time to name a collection #CREMATED in light of the #COVID19 #coronavirus and people who’s loved one’s don’t get a proper burial.”

Star’s fans are fiercely defending his choice, noting that he had planned the launch months before the world erupted into a pandemic.

“[At] everyone saying it’s insensitive.” Instagram user @gabrielleeeemaddock wrote in a comment on his post announcing the launch. “This was made MONTHS ago before the pandemic. He even halted production and the release during the pandemic. He’s probably releasing it now because people have been harassing him about releasing the collection. And if you’re still mad? IT IS AN EYESHADOW PALETTE.”

Other commenters who are more comfortable with the idea have taken the opportunity to make jokes about death.

“My first thought was: my father better not be in there,” Instagram user @bywonno wrote.

Some are sharing images of their family members’ urns in the discussion.

“My mom is so excited for the new @JeffreeStar palette! #CREMATED,” Twitter user @Kelgrohs wrote.

The palette is set to be revealed in a video on Star’s channel on May 16.