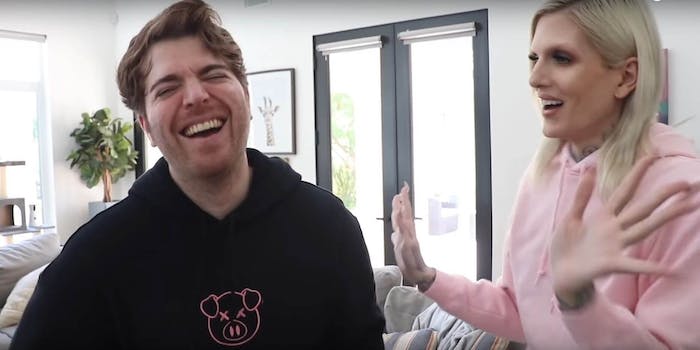 Shane Dawson is worried he infected Jeffree Star with coronavirus

YouTube star Shane Dawson has been fretting for much of March because he thinks he might be infected with coronavirus. Now, he fears he might have given it to his fiance, Ryland Adams, and his friend and collaborator Jeffree Star.

As noted by PopBuzz, Dawson began to experience flu-like symptoms in January but was never diagnosed with the flu.

The first reported case of COVID-19 in the U.S. wasn’t disclosed until Jan. 20, and there were only eight reported positive tests by the end of January, so it’s highly unlikely Dawson would have been experienced it that early. But he wrote on Instagram that he believes he caught the virus.

“I think I had the corona. I think everybody around me had the corona,” he wrote. “And I’ve traced it back to myself. Not saying I’m patient zero, because I don’t leave my house. There is somebody who came into my house that I think gave it to me, because they were sick, and then like four days later I got really sick.”

He said he called a doctor to his home and got tested for the flu.

Dawson wrote, “They do the swab thing. This is before corona, like, it was around but it wasn’t like a thing in L.A. Nobody was testing for it. So the doctor does the test, I get a call the next day, saying: ‘Really weird, you’re negative for every strain of flu and every cold and every virus.’”

After he began feeling better, Dawson said he had a meeting with Star and various other people. That’s why Dawson is worried he infected others, including Star.

Meanwhile, Star hasn’t mentioned anything on social media about being sick. He did tweet this photo of his dog on Tuesday, leaving it up to interpretation whether he’s tired or not feeling well.

On Monday, Star wrote that he had been inside of his house for nearly a week but that he was receiving a Botox treatment to “quarantine these fucking wrinkles.”

Clearly, though, Dawson had been struggling with his unease about COVID-19. As he wrote on Twitter last week, “I don’t want to add to the anxiety of the situation but I’m genuinely spiraling about the corona virus and I just don’t really know how to process all of this. If ur feeling the same just know it’s ok to be worried right now even if people tell you you’re overreacting.”