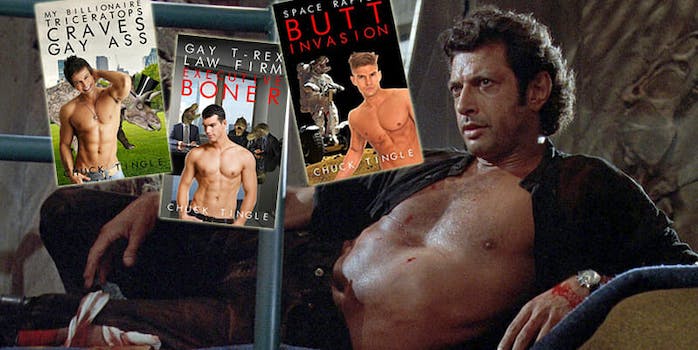 Goldblum explains which dinosaur is the most handsome of all.

Mysterious gay erotica novelist, political activist, and podcaster Chuck Tingle rose to internet fame due in part to his self-published books that initially explored the love between a man and a dinosaur (or, dinosaurs plural). In fact, his very first short story published in 2014 was titled My Billionaire Triceratops Craves Gay Ass, which was followed with classics such as Gay T-Rex Law Firm: Executive Boner, Space Raptor Butt Invasion, Gaygent Brontosaurus: The Butt Is Not Enough, and so on and so forth.

Jeff Goldblum, as we all know, is the sexy shirtless hero from the first two Jurassic Park movies who makes his debut in the upcoming second incarnation of the franchise, Jurassic World: Fallen Kingdom.

For the two to cross (internet) paths seems almost serendipitous—and that’s just what happened on Tuesday when Goldblum stopped by Reddit for an AMA to promote his other new movie, Hotel Artemis, out this Friday. The good doctor asked “HANDSOME JEFFS” a silly question about who he thinks the most handsome dinosaur is, and Goldblum, ever the pure delight of a human being, was more than happy to play along.

Chuck Tingle: hello HANDSOME JEFFS i am dr chuck tingle worlds greatest author of dinosaur stories you are HANDSOME JEFFS worlds greatest actor of dinosaur movies. i think it would be nice if we worked on a big time show to PROVE LOVE IS REAL BETWEEN MAND AND DINOSAUR i am open to this discussion. now i will ask what you think the most handsome dinosaur is? Lawyer Dinosaur, Bad Boy Biker Dinosaur, or Handsome Doctor Dinosaur?

Jeff Goldblum: Well Doctor, we obviously have a very magical connection. I love all your ideas, and I would say the handsomest dinosaur is Handsome Doctor. I mean Handsome is right there in the name… final answer.

Chuck Tingle: thank you for PROVING LOVE IS REAL in this important way i appreciate this interaciton [sp] on our timelines i am so thankful that we could share in this way thank you. i agree that this is the most handsome dinosaur thanks.

I don’t know about everybody else, but this seems like the beginning of a beautiful friendship. Or at least the interaction that launched a thousand fan-fics—take your pick!