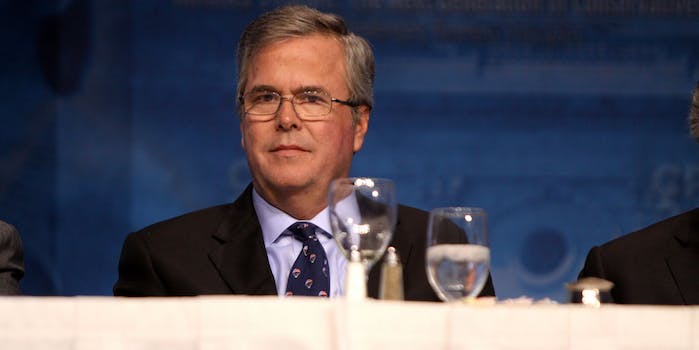 Jeb Bush has not had a good year. He polled at a low percentage for the entire course of his his presidential run.

He was treated as “the annoying friend” anytime he tried to make points during Republican primary debates.

Ben Carson, who has no political experience at all, was the more popular candidate between the two of them.

He had his mom try to convince us that he wasn’t so bad.

After he dropped out of the race, he was forced to endorse the Zodiac Killer.

No one seemed to care that both his father and brother were once presidents and that maybe he’d be qualified to do follow in their footsteps.

He had to watch as conservative America fell in love with this guy.

He pleaded for someone, anyone, to give him a round of applause after pouring his heart out in the name of desperately wanting to live in the White House.

And ultimately, he was cast aside to wander Boston for the rest of his days.

But none of these moments is as bad as this one.

Maybe Donald negotiated a deal with his buddy @HillaryClinton. Continuing this path will put her in the White House. https://t.co/AlvByiSrMn

There’s no worse feeling than your own blood going against your wishes after a disastrous year. So if you see him, now would be the perfect time for you to clap for Jeb Bush. He needs it now more than ever.

I hate that I feel so bad for Jeb Bush but I DO.