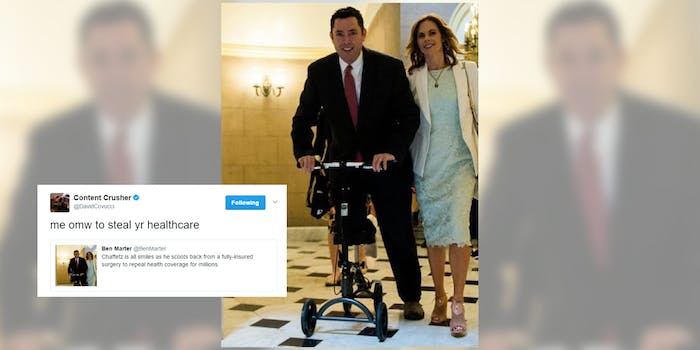 Jason Chaffetz wasn't about to let foot surgery prevent him from voting today.

Jason Chaffetz has had some spring. The Republican from Utah began by saying people needed to choose between iPhones and healthcare, and it culminated with his announcement that he would not seek reelection, which was followed by a crazy bit of speculation that he might resign immediately, which he himself hasn’t really tried to squelch.

He also registered some domains for a possible 2028 presidential run, and somewhere in between all of that, he had foot surgery. But Chaffetz refused to let that minor obstacle from casting a House vote on replacing Obamacare.

He rode a scooter.

Chaffetz is all smiles as he scoots back from a fully-insured surgery to repeal health coverage for millions. pic.twitter.com/XrM8DSQXO2

If you thought that was ripe for a meme, well then, you are a denizen of the internet.

For starters, everyone made the “Bae Come Over” joke that played on Chaffetz sudden urgency to vote on a bill.

GOP: We have a bill that will kill poor people & children.

There were some “on my way” memes as well.

A lot of people picked up on just the glee on his face over this vote.

Find someone who looks at you the way Jason Chaffetz looks at a bill that strips 24 million people of access to healthcare. pic.twitter.com/NLtkZjEgMk

Chaffetz: Yeah I'm going to miss like four weeks of work bc of surgery

*chance comes up to strip millions of their healthcare*

Many also noted that Chaffetz was potentially voting to strip away the ability for people to get the same surgery he just had.

with his pre-existing condition https://t.co/XGhyI5N0po

Shout it out: "THIS IS WHAT HYPOCRISY LOOKS LIKE!" https://t.co/MfYNb00pen

Republicans voted to pass the American Healthcare Act today along party lines, and the bill now heads to the Senate.