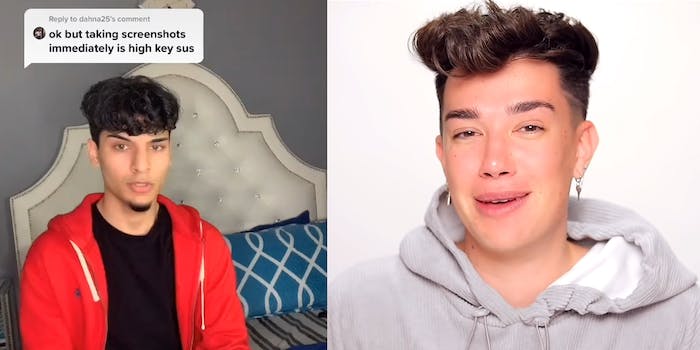 At least three men came forward with accusations against Charles.

Another TikToker has alleged that popular beauty vlogger James Charles pressured him for nude photos after the two started messaging.

In an eight-part series, TikToker Uzzy (@lifeofuzzy) details reaching out to Charles on Instagram after his Tati Westbrook feud in 2019, and then moving their conversation over to Snapchat. He says during their third day of chatting, things got “weird,” though Charles had allegedly initially said he wasn’t “looking for anything.” He claims Charles then asked him for a dick pic, and he didn’t really “seem to give a shit” about him opening up about his struggle with anxiety and depression and a previous “toxic relationship.”

“He knew I was vulnerable,” he says.

He also provides a Snapchat message, where Charles appears to be pressuring him to go into the bathroom to take nudes.

The other allegations against James Charles

On Friday, another man came forward with accusations against Charles. The tweets have been deleted, but @a0nnnj claims he told Charles he was 17 when he introduced himself, and that while nothing “sexual” happened, he thought it was “weird” that he kept flirting to a minor.

Another accuser, who goes by redzai on TikTok, claimed on Friday that Charles sent him unsolicited nudes and pressured him to send nudes, even after telling him he is 16. Charles issued a statement about the accusation, saying it is “completely false.”

In January, another man alleged on TikTok that Charles befriended him on Snapchat and then sent an unsolicited nude photo, even though the man told Charles he is straight. Charles has previously been accused of attempting to manipulate straight men into relationships.