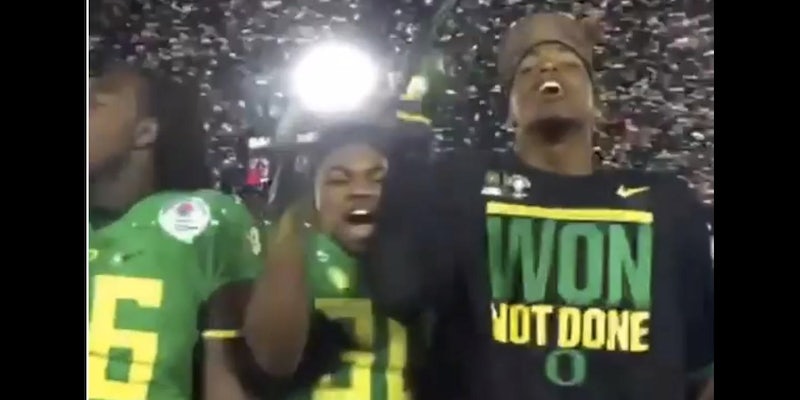 ‘No means no’ chant lands Oregon Ducks in hot water

For a group of Oregon Duck football players, the phrase “No means No” means possible suspension.

In the wake of Oregon’s 59-20 shellacking of Florida State in the 99-year-old Rose Bowl (a.k.a. the semi-finals for the National Championship), the celebration by a handful of Oregon players turned ugly. Four were spotted chanting “No means no” to the tune of the FSU fight song while performing a tomahawk chop, mocking the Seminoles as team and, in particular, their embittered star quarterback Jameis Winston. Winston’s well-chronicled sexual assault charges reached a social media crescendo in September when his on-campus rant led to a one-game suspension.

The post-Rose Bowl chant was not televised by ESPN but was captured on video and shared on Vine and later on the Oregonion’s website, Oregonlive.com.

It is an understatement to say the Rose Bowl was not Winston’s finest hour as a college football player. The former Heisman Trophy winner was underwhelming from the opening kickoff and his performance was best symbolized by an awkward third-quarter fumble that led to a Ducks touchdown.

The third-quarter meltdown caused Seminoles coach Jimbo Fisher to scold Winston on the sidelines with a number of semi-pro lipreaders interpreting the discussion.

With a reputation for having a successful and clean program, the powers that be at University of Oregon announced the players involved in the “No means no” taunt—linebacker Torrodney Prevot, running back Kani Benoit, receiver Chance Allen, and safety Tyree Robinson—will be disciplined. No specific punishment was spelled out, but it may include being left off the roster for the Ducks’ college football title game Jan. 12 against Ohio State.

Helfrich statement continued: "This is not what our programs stand for, and the student-athletes will be disciplined internally."

While social media weighed in about  the Ducks’ unsportsmanlike conduct…

If I need to explain to you why the "no means no" chant isn't funny, then it's best you don't tweet me.