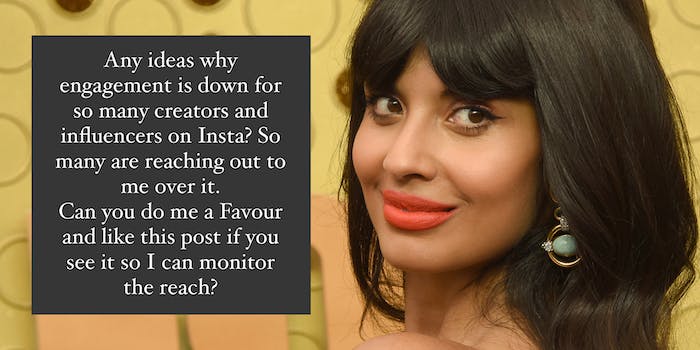 No one has it figured out.

Low engagement on Instagram has been an issue for influencers since the app changed its feed in 2016 from reverse-chronological order to an algorithm. More recently, users of the app have speculated that there are newer revisions in the algorithm due to, they say, extremely low engagement, stale feeds, and less visibility of their close friends’ posts. While Instagram has yet to release a statement about the accusations, users of the app took their complaints to… actor Jameela Jamil.

“Any idea why engagement is down for so many creators and influencers on Insta? So many are reaching out to me over it. Can you do me a favour and like this post if you see it so I can monitor the reach,” the actress asked in a post.

While it’s unclear why users are reaching out to Jamil for answers, the claims that influencers and creators—along with everyone else—are suffering from the algorithm seems to be a growing problem. Even more so, users who utilize the platform as a means for promoting their businesses have noted the negative effect the algorithm has had on their sales.

Here’s to hoping Jamil figures out the solution for us all.