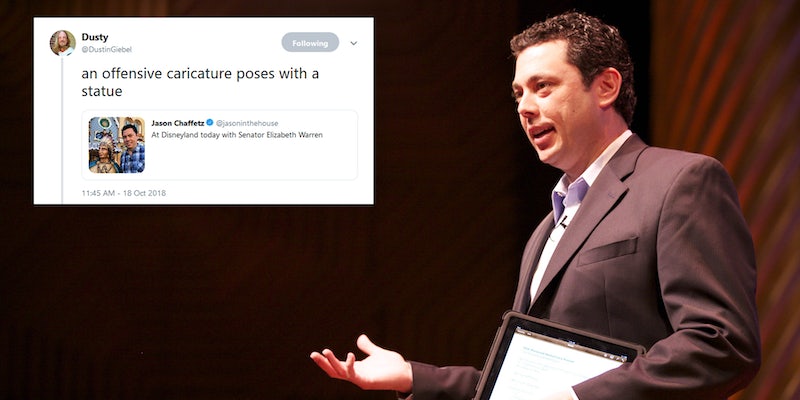 The response was quick.

Former Rep. Jason Chaffetz (R-Utah) caught heat online on Thursday after he posted a picture of himself standing next to a wooden Native American statue in an attempt to mock Sen. Elizabeth Warren (D-Mass.).

Chaffetz’s attempt at humor comes as Warren released the results of a DNA test earlier this week that showed she had Native American ancestry.

“At Disneyland today with Senator Elizabeth Warren,” the former representative wrote, posting a picture of him standing next to a statue that depicts a Native American.

The test has been a source of mockery from President Donald Trump and other conservatives. Sen. Lindsey Graham drew flak after he said his hypothetical DNA test would “probably be Iranian” and added that it would be “terrible.” The president has sent out numerous tweets mocking the senator, as has his son, Donald Trump Jr.

an offensive caricature poses with a statue https://t.co/ysZQlmddJe

Yeah… don’t do this people. https://t.co/waGrHEpxrs

Look your daughter in her face and gleefully show her what a low-life dad you really are. https://t.co/5eXelZ2D5c

Wow, really? You're going that low, huh? It really shouldn't surprise me, to be honest. https://t.co/xiiwPVMMIx

The former lawmaker has not said anything regarding the massive outcry against his post,but did comment on something the president did since posting the photo.