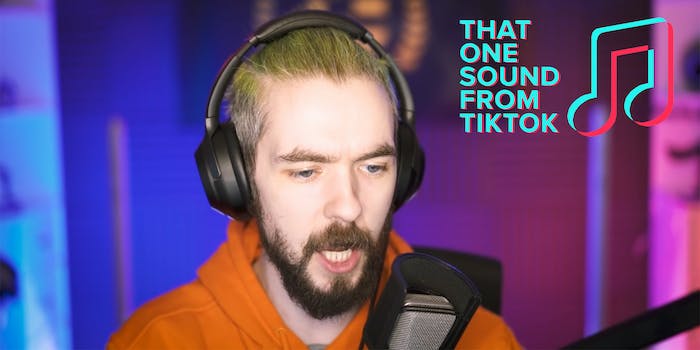 A new TikTok trend is all about duality.

What does it feel like to exist online right now? Recent texts have attempted to convey that funny feeling, to reconstruct the soul-sucking gush of posting, commenting, consuming. What it truly looks like is harder to communicate.

However, a new TikTok trend does a good job illustrating what it looks like when our attention is constantly pulled in different directions.

Back in January, Aaron Blythe posted the sound with the caption “when u accidentally send a message before finishing it.” The sound is perfectly situated to accompany moments of panic or frustration.

But in the last month or so it’s blown up, as TikTokers use it to illustrate being pulled in two directions (via the Time Warp Waterfall effect), or highlighting certain traits or internal debates.

“Me trying to stay Angry at my Boyfriend,” wrote ellie.hinchy. “Him making Me laugh mid Argument.”

If you’re a fan of YouTuber Jackspecticeye (real name Seán McLoughlin) you probably already know the sound is from him. The original video is from December 2020 and features him playing the game Happy Wheels as part of a “Nostalgia Week” series. Around the 4:08 mark, he falls on a spike, which produces the sound.

McLoughlin has a massive following—more than 27 million subscribers—so this isn’t necessarily an obscure sound for those who’ve been following him. In the comments of a What the Audio post about the sound, a few people thought it was from Toy Story.

Around the time the audio was posted to TikTok in January, McLoughlin announced his father had passed and he was taking a break from YouTube. He returned in February. Last summer, he also took a break from YouTube, citing mental health and exhaustion.

We reached out to McLoughlin for comment on how the sound is being used on TikTok. In related news, he voices Q*bert, and also appears in in the upcoming Ryan Reynolds movie Free Guy.