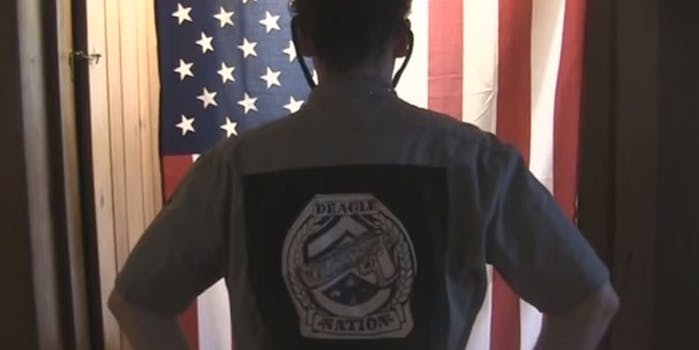 The line between Gamergate parody and hate speech is invisible.

A video appeared recently that that reawakened fears about Gamergate. It caused game developer Brianna Wu to file a restraining order against the man in the video. It was also a factor in her reasoning to pull her company, Giant Spacekat, out of gaming festival PAX East, fearing for her employees’ safety. It scared Wu, it scared other female developers and writers, it scared a lot of people who were against Gamergate, and it even scared me.

And according to the video’s creator, it was all a joke. The stunt claims to be  in the name of comedy, but it fell somewhere between legitimate commentary and unbelievable ignorance.

“Jace here,” the text scroll begins. “I am posting this for evidence of attempted murder.” The video, posted by Jace Connors, or ParkourDude91, shows a car wreck along an icy stretch of highway. He posits a theory: that it was the fault of Brianna Wu, a game developer who he claims rigged his mother’s vehicle to crash. He said he was on his way to her house to expose her as a “corrupt gamer,” ending with “this is not over.”

Over the weekend, BuzzFeed published an interview with Jace Connors (whose real name is Jan Rankowski) stating that the videos and his professed obsession with Wu were all part of an act. The 20-year-old from Maine is actually a part of the comedy troupe Million Dollar Extreme and has been developing the character for years as a parody of Internet culture. He also said that since the aforementioned video, he has received death threats from people in the 8chan communities who realized that he was making fun of them. Sam Hyde, another MDE member and partner in the Jace Connors hoax, stated that people have showed up at his apartment, are harassing him at his job, and are generally making him fear for his life.

“I started it as a joke, but it’s become far too real and I wish I could take it all back,” Rankowski said.

“Jace Connors” was apparently a parody of geek culture created before Gamergate, but it ultimately blended seamlessly with the movement as it gained steam. The character exemplified the stereotypes of the hyper-masculine online gaming scene: Jace Connors sided with the views of Gamergate, which worked against the representation of women, minorities, and LGBT people in games. He was a former military commander with a bad temper, a pension for firearms, and a history of mental health problems like schizophrenia. Connors was an amalgamation of Mountain Dew advertisements, first-person shooters, and the image of the Internet troll. People suspected earlier that the character could have been a troll, but it hadn’t been confirmed until this week.

Out of context, Connors fits right in with the satire perpetuated by MDE, which uses anarchist-style trolling at real-world events. Sam Hyde, for instance, once infiltrated a TED Talk with the now infamous “2070 Paradigm Shift” speech, wherein he walked onstage in fake battle armor and spouted platitudes about “change” and “ideas.” There are clearly Andy Kaufman influences at play here—the members hoping to feign sincerity with disguises and sometimes insulting events with the purpose of mocking certain groups. Wu mentioned to Jezebel that she had actually enjoyed Hyde’s prank.

But that stunt didn’t harm anybody. It didn’t cross the line from disassociated parody to insults, exploitation, and laziness. As Wu told the Verge, “there is a really big difference in satirizing the bombast of a TED talk and making a woman and her developer team think they’re going to be murdered.”

The difference between Hyde and Rankowski is that thin line. Wu had been open about the situation, tweeting about talks with law enforcement. She even posted a copy of a restraining order that she and authorities had attempted to serve against Rankowski before knowing his real identity. Rankowski never broke character to assure Wu of the joke, nor did he respect that she had received threats from others and that the act would cause serious mental stress. In fact, it seems like those involved abused those facts for a much larger impact, using Wu’s past run-ins with Gamergate to magnify the character.

There’s something on the Internet called Poe’s Law, which states that without some sign of the author’s intent of humor, it’s impossible to create a parody of extremism that somebody won’t mistake as actual extremism. In a medium that can exist without clear tone, body language, or sometimes the identity of the humorist, true intent is hard to gauge. The original adage, introduced by author Nathan Poe, specifically referred to discussions about creationism, but it can be applied to other, broader belief movements such as Gamergate.

Separate from Wu’s personal experience, what the Connors character did was add another voice to a movement that shouldn’t have any. More specifically, he perpetuated illegal acts in the process in threatening to track down Wu. This is a group of people that have run women out of their homes. Zoe Quinn, a game developer whose personal life became some of the early influences for Gamergate, still hasn’t moved back home. A talk given by games critic Anita Sarkeesian had to be canceled because there was a threat of a mass shooting. Following the release of the Connors video, Wu explained, “Anyone that’s moderate has left the movement. [Now] you just have these extremists here. For them, it’s straight up entertainment.”

Rankowski’s persona only added it to a dangerous community that is perpetuating an abuse campaign across the Internet on marginalized groups. There is nothing funny about exploiting those who are already being victimized. Joseph Fink, creator of the Welcome to Night Vale podcast, echoed this thought in a tweet: “Comedy is funny and brave when aimed at yourself or the powerful. It’s lazy and cruel when aimed at the weak or persecuted.”

There’s a phrase that’s circulating around Twitter in regards to Gamergate: Will I be next? Women have been pushed out of the industry due to harassment campaigns, have had to carefully comb the Internet and delete personal information, and implement two factor authentication on all accounts to combat a possible attack. Outside voices have attempted to comment on the situation, such as a recent episode of Law & Order: SVU where the female victim of an online harassment campaign articulates the at the best way to combat abuse is to just leave the industry, essentially giving in to the culture of fear.

Connors’ character has further perpetuated this message of Gamergate—that women should just give up—and reflected a dangerous stereotype of gaming to the world. Thus, he’s only made the problem worse.

Parody takes on many different forms, and it never strictly has to be chuckle-worthy. It just has to comment on a subject, usually by mimicking it, creating an outlandish version of it, or making fun of it to prove a point. However, there is a line that shouldn’t be crossed, where the satire is targeted at those who already in danger to the point that they have to flee their homes or put their businesses on the line. On top of further targeting Wu, it affected those who worked for Giant Spacekat and those who already felt unwanted in a torn gaming community by making them feel even more worthless. Sorry, that’s not funny.