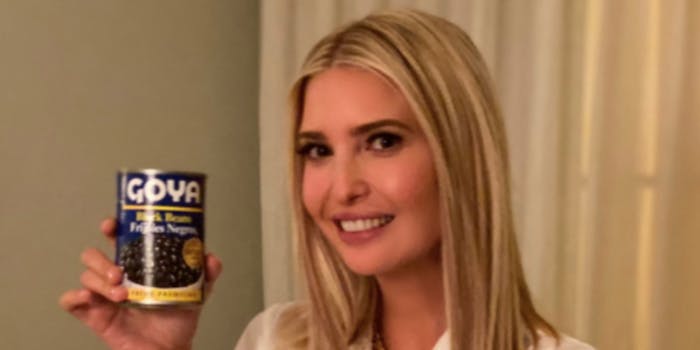 Soon, Ivanka was holding a variety of things in the photo, none of which were beans.

The picture itself is quite simple, but the debate it has stirred up is anything but. Last week, the CEO of Goya Foods praised President Donald Trump for his abilities as “a builder.” In response, much of the Latinx community announced their intent to boycott Goya products.

That’s where Ivanka comes in. She posted a photo of herself holding a can of Goya black beans to Twitter the caption: “If it’s Goya, it has to be good. Si es Goya, tiene que ser bueno.”

Ivanka’s support of a business that vocally backed her father surprised no one. However, what did raise eyebrows was that it appeared that Ivanka could have violated federal law by posting the picture. Commenters pointed to a particular aspect of federal regulations, which outlines the “standards of ethical conduct for employees of the executive branch.” Ivanka is a senior advisor to the president.

5 CFR § 2635.702 outlines that “an employee shall not use his public office for his own private gain, for the endorsement of any product, service or enterprise, or for the private gain of friends, relatives, or persons with whom the employee is affiliated in a nongovernmental capacity.”

Many commenters pointed to this specific law as evidence that Ivanka had committed a crime with her Twitter post.

Other commenters skipped the legal discourse and merely shared their disdain for the 38-year-old Trump advisor. “Goya f*ck yourself,” Brian Tyler Cohen wrote.

Some commenters used the viral moment to endorse Joe Biden for president.

“If he isn’t Trump, he has to be good! Si no es Trump, ¡tiene que ser bueno,” one person wrote, playing on Ivanka’s original tweet.

Given the last three-and-a-half years, you might think the Trump family would be wary of posting pictures that are easy to edit. Apparently not. Ivanka’s photo quickly enticed edit-savvy internet users to begin reworking the original picture. Soon, Ivanka was holding a broad range of things in the photo, none of which were beans.

The remainder of commenters, apparently too exhausted to engage in legal discourse or a photo editing war, merely urged Ivanka to spend her energy elsewhere. With more Americans dying every day from the coronavirus, not to mention a myriad of other issues, many people felt the entire discussion was pointless.