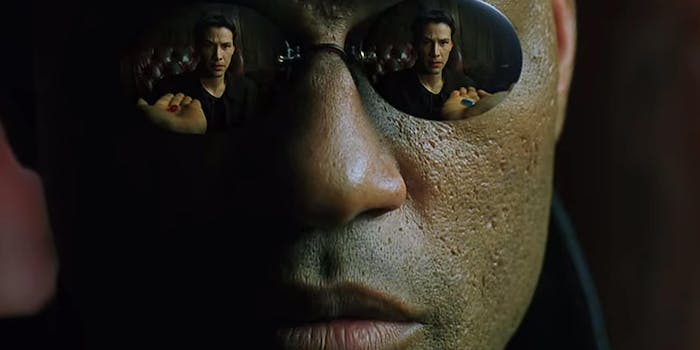 A perfect response to tweeting about taking the red pill.

After Elon Musk and Ivanka Trump tweeted about taking the “red pill” on Sunday, Lilly Wachowski felt the need to get involved. The Matrix co-director logged onto Twitter to say “Fuck both of you” in response.

A surprising number of self-proclaimed “red pillers” seemed unaware of who Lilly Wachowski is, and that the red pill concept they’ve appropriated for their ideology actually originated in her and her sister’s blockbuster sci-fi trilogy.

While it’s not clear which particular red pill Musk and Trump are swearing allegiance to—choices range from women hating MRA’s over on Reddit to 9/11 truthers, though all are united by fairly far-right political ideologies as well as a subscription to one conspiracy theory or another.

Strangely, Musk’s inclusion of the red rose emoji has led to speculation that’s he’s actually attempting to claim allegiance to a socialist cause, as many of those use a red rose and even that specific emoji as a symbol. However, as his policies go directly against everything the American socialist movements are calling for right now, that seems unlikely.

Of course, that lack of specificity might be the point, as Slate’s Matthew Dessem has suggested. By choosing not to clarify which cause Musk and Ivanka are aligning themselves with, they draw support from the various right-wing and conspiracy theorists who hopefully assume that it’s their movement being spoken about, while retaining plausible deniability with everyone else.

Meanwhile, things are looking a little tense on the home front for Musk, as his mother-in-law may have made some now-deleted tweets (screenshoted by BuzzFeed’s Ryan Mac) calling him out for posting “MRA bullshit” on Twitter only weeks after Grimes gave birth to their child.

The Daily Dot has reached out to Garossino for comment and will update if she responds.