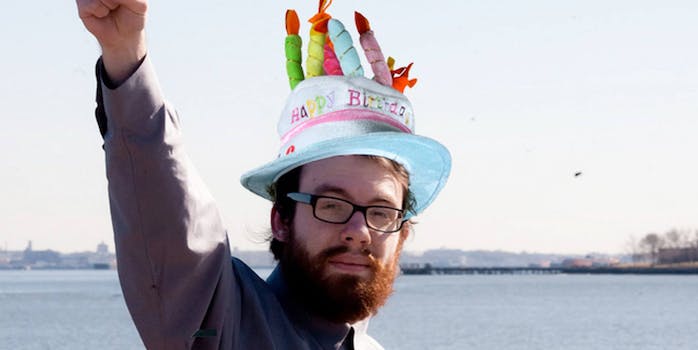 It’s Sept. 3, and Weev is still not free

A new tribute site tracks the imprisonment of the Web's premier troll.

Abe Vigoda can take credit for many things: inspiring two sites dedicated to updating internet users on his vital signs. Bringing to life one of the great characters of ’70s sitcom television. And now, bringing a little bit of joy into the life of the world’s premier troll.

Weev is not free.

Currently serving a disputatious 41-month sentence for essentially figuring out how to find public Web pages, Andrew “weev” Auernheimer can use all the cheering up he can get. He recently passed his 28th birthday in Allenwood Low, a low-security prison in Pennsylvania.

His friend Jason Gulledge was inspired by the Abe Vigoda’s sites to create the IsWeevFree, a like-minded landing page that tracks Auerhheimer’s current status.

“Before he was imprisoned, we talked daily,” Gulledge told the Daily Dot. “I consider him to be a beautifully annoying troll/friend. I’ve been in touch. His lawyer has passed messages to him.”

Launched in late July, the site answer the obvious question, tallies the number of days each has spent in custody, and provide links to fundraising and informational sites relating to Auerhheimer. Gulledge went on to create similar pages for imprisoned Anonymous affiliate Barrett Brown (IsBarrettFree) and recently sentenced WikiLeaks leaker Chelsea Manning (IsChelseaFree).

“Maybe a bit overboard for what the site is, but I knew weev would approve,” Gulledge wrote. “Actually, he’d probably insist I do something a bit trollish on the site.”