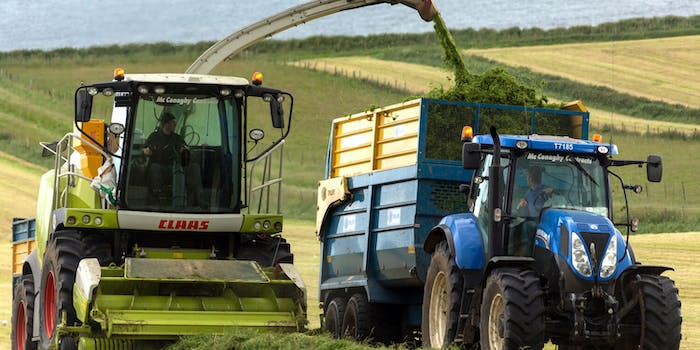 TikTok users are under investigation for dangerous stunts with tractors

In March, a man died while making a TikTok of himself riding a tractor.

As TikTok has exploded in popularity, the video platform has evolved from a benign place to share 15-second dances into a lawless wasteland of dangerous stunts engineered to go viral. Well, that’s at least what it’s become for Irish agricultural workers.

Some Irish TikTokers have recently drawn criticism for engaging in reckless behavior using agricultural machinery, RTÉ Ireland reports. Their stunts include driving a quad up a steep hill, standing on the drawbar of a tractor-trailer being driven on a public road, and sitting in the bucket of a digger swinging at high speed.

Ireland’s Health and Safety Authority is trying to identify the vehicles and locations shown in these TikToks. The organization described this behavior as “shocking” and has the authority to fine employers for it.

Additionally, Ireland’s police force, An Garda Síochána, has said, “Any reckless behaviour which puts the lives of operators, passengers or any road users at risk, will be investigated fully.”

Michael Creed, Ireland’s minister for Agriculture, Food, and the Marine, also denounced these stunts on Twitter on Tuesday.

“This is alarmingly childish immature behaviour,” he wrote. “I see boys tasked with adult work clearly incapable of responsibility.  I’m sure their families will be mortified. They’re lucky that’s curable. Too many others are not so fortunate!”

These dangerous agricultural stunts violate TikTok’s community guidelines, which forbid “dangerous challenges that might lead to injury” and “content that shows the inappropriate use of dangerous tools.”

It would behoove the platform to crack down on such videos; in March, a 23-year-old man from India died while attempting to film himself riding on a fast-moving tractor and the vehicle overturned and crushed him.