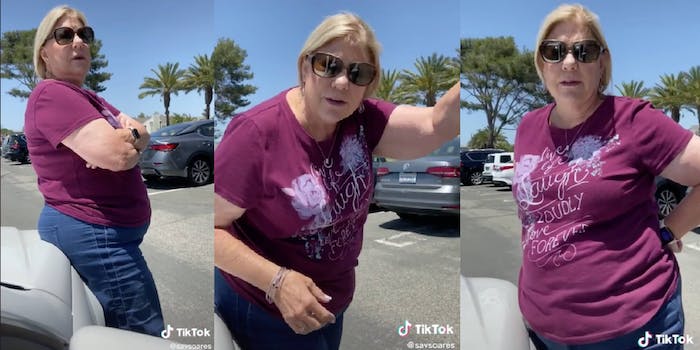 Another Karen has joined the ranks.

A TikTok video of a woman refusing to get off a car after a parking dispute at the beach is going viral, with netizens now dubbing the woman “Parking Lot Karen.”

In the video, which was posted on Sunday, the woman can be seen reaching into the passenger seat window to grab the phone from the person recording. “Stop it,” she says. The girls in the car repeatedly ask her to “get off the car,” as she sits on the front hood. The woman says, “I’m not sitting on her car; I’m leaning on it.”

The woman appears to be upset over a parking spot. There is one spot visibly open, and the woman waves for the people she is with to park in it. After another spot opens up, the girls tell her that there are now two spots open and ask her to get off the car.

She eventually walks back to her car, which is out of view but presumably behind the car she was sitting on.

The video so far has over 17 million views and over 4 million likes.

Savannah Soares, @savsoares on TikTok, explained how the altercation started and what happened after in a follow-up video. She said that as she and her friend began to look for a parking spot at the beach, they pulled up behind a car that was at a full stop. Assuming they were waiting for something, the girls just went around and the cars behind her followed.

Soares said that in the aftermath of the video, the woman refused to leave her car until the two girls left theirs.

As the video began to garner more and more views, the comments section became flooded.

Many others suggested the same thing, saying Soares and her friend had a lot of patience.