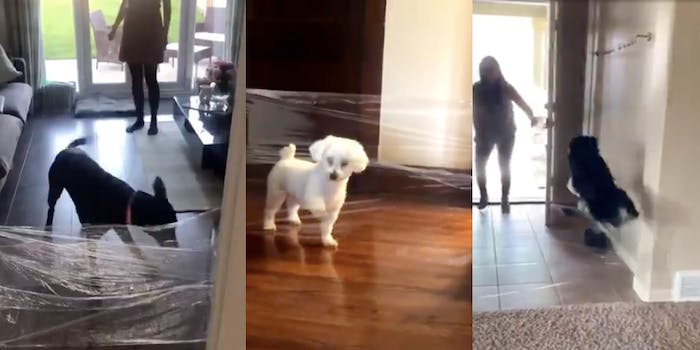 Seriously, just go play fetch with your dog instead.

As much as we all love videos of animals doing derpy things like the lovable fools they can sometimes be, there’s something just a bit tragic about pet owners tricking their loyal pals into looking ridiculous.

That’s the premise of the Invisible Challenge, a trend going around Twitter in which humans spread clear plastic wrap across a doorway and coax their dogs into running face-first into the invisible wall.

The purpose of the challenge varies between people wanting to embarrass their pups for the views and those who want to see if their dogs might actually be smart enough to figure out how to overcome such an obstacle as…plastic wrap.

This is the best challenge ever pic.twitter.com/l5bngFIgDF

And some pups are wising up to the game right away, making their owners look stupid as hell for even attempting to trick them.

tried to do the #invisiblechallenge with Heidi but she’s too smart pic.twitter.com/Sd8lBssh3U

The #invisiblechallenge you can't fool Loulou … bye! How will your dog/cat/bunny react to this? pic.twitter.com/RvMTUX61oM

Of course, not everyone is amused by the way our four-legged friends are being treated for nothing more than the possibility of going viral. Some are even hoping for some #humanfails as justice for what these brave and noble dogs are having to endure.

Who else is waiting for someone to jump over the plastic wrap and bust their ass…just me? #invisiblechallenge pic.twitter.com/QyMw2kCqlY

I’m waiting to see a video of a person forgetting to jump the plastic wrap while trying to trick their dogs. 😂 You know it’s going to happen.. #trickthemselves #invisiblechallenge

Ultimately, the tragic betrayal of man’s best friend is still a series of cute, funny videos of cute, funny animals being cute and funny and it’s hard to look away, no matter how cruel and unnecessary the challenge might be.

Hopefully, every single good dog who has been subjected to this degrading Invisible Challenge experience received a handful of treats and a good belly rub after the fake doorway was finally taken down.

And knowing how quick to forgive dogs can be, it’s probably best this challenge centered around them instead of other critters who are a little better at holding grudges and a lot more devious at exacting their revenge.