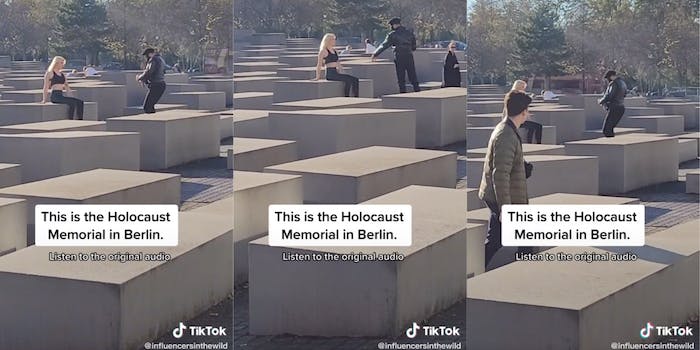 A viral TikTok video from the popular Influencers in the Wild page shows an influencer posing at the Holocaust Memorial in Berlin, Germany. Many saw the posing as disrespectful.

Influencers in the Wild posted the video, which currently has over 10 million views, on Saturday. The caption reads, “Don’t do this, ever.” The overlay explains the location, the Holocaust Memorial in Berlin. It shows an alleged German influencer sitting on one of the concrete slabs, essentially posing for a photoshoot with a photographer.

As an unseen man films the problematic posing, an unseen woman says, “I’m horrified beyond words.”

The Holocaust Memorial in Berlin, designed by architect Peter Eisenman and engineered by Buro Happold, was made in memory of the Jewish victims of the Holocaust. It is officially called Memorial to the Murdered Jews of Europe and is a 200,000-square-foot site covered with 2,711 concrete slabs or “stelae.”

The comments section mostly showed reverence for the location and its original purpose.

“This place has probably the most eerie, loudest silence I’ve ever experienced. I couldn’t imagine thinking this was somewhere for that,” said a commenter.

“Are you kidding me?” said one woman.

“The people saying, ‘the artist said it’s ok to take photos,’ are completely missing the point of why this is disrespectful,” said another commenter.

This incident isn’t the first time the Holocaust Memorial has been disrespected or posed on by people for seemingly aesthetic purposes. Several YouTube videos detail instances of inappropriate photos, including a video detailing a project called the “Yolocaust” by the artist and activist Shahak Shapira.

The Daily Dot reached out to the potential influencer for comment.