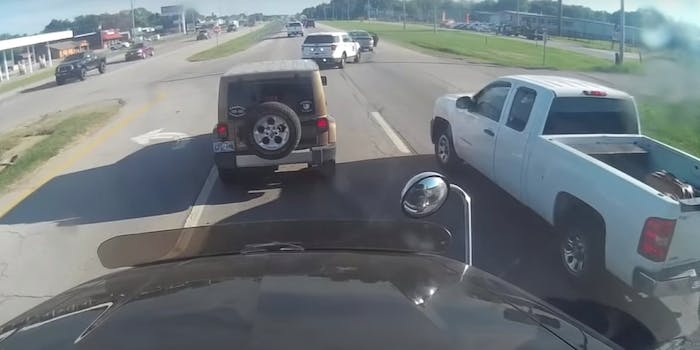 A video from a dash cam posted to YouTube on Sunday captures what could have been a very different viral moment in action. The clip shows a car slowing on a busy street as two young boys jump out and start dancing.

They are, of course, trying the “In My Feelings” challenge that became a viral sensation over the summer. Videos of the challenge, inspired by Instagram comedian Shiggy, often involve hopping out of a moving car to dance to Drake’s hit track.

But the kids didn’t get very far. The moment they emerge from the car to dance, a police vehicle in the next lane lights up and pulls up behind them. The car is forced to pull over.

Arguably the best part of the video is the driver whose dashcam caught the whole thing. He bursts out in laughter as he watches it unfold.

Between the cop and the busy street, the kids’ timing couldn’t have been worse. At least they’re not alone in exemplifying the risks of the “In My Feelings” challenge. So many videos circulated showing people falling out of cars while attempting it that the National Transportation Safety Board issued a safety warning on Facebook in July.

But that hasn’t stopped an insane number of people from trying it anyway.