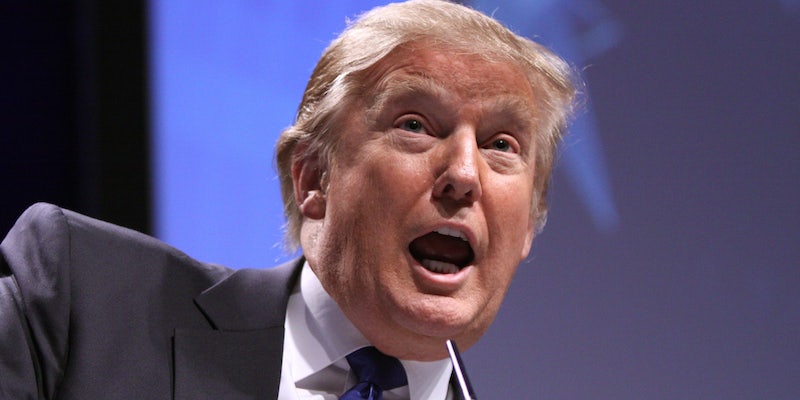 The president tried to intimidate, but everyone just laughed.

When the 9th Circuit Court of Appeals issued its decision on Donald Trump‘s immigration ban, all eyes were glued to one Twitter account: @dril.

Just kidding. Everyone was waiting to see what torrent the president would unleash, and he did not disappoint, issuing only the second all-caps utterance of his presidency.

But as happens with most of the president’s actions, what was meant to be a stern admonishment delivered to nation with gravitas quickly became the butt of thousands of internet jokes.

For starters, the owns were savage.

"SEE YOU IN COURT"
"Ok cool, that is where we work, so it is very convenient for us"

But the riffs were great, too.

And then he tweeted…..
"SEE YOU IN COURT"
After just LOSING IN COURT‼️ pic.twitter.com/o759gp7hjB

Trump tells judges who ruled against travel ban “SEE YOU IN COURT”, surprising many with his elementary understanding of where judges work.

You do not intimidate judges, or public lawyers, by saying "See You In Court".
That is their natural habitat.
That is where they have power.

Bartender: OK, that will be $7

Me: SEE YOU IN COURT

"I'LL SEE YOU IN COURT!" is the rich man's version of this pic.twitter.com/3ZiqOgI4YS

him: I'LL SEE YOU IN COURT
america: pic.twitter.com/W8KgqPKLa8

I feel @RealDonaldTrump's "SEE YOU IN COURT, THE SECURITY OF OUR NATION IS AT STAKE!" is so much better with some added Comic Sans. pic.twitter.com/yCxAWQviIF

Those were all well and good, but as is always the case, we probably should have just looked to @dril.