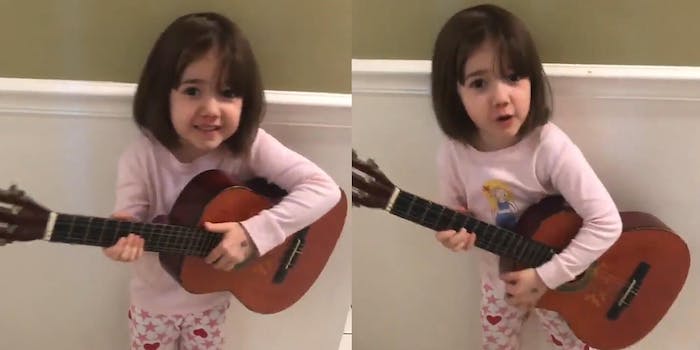 It's a banger, and there are remixes to prove it.

The coronavirus pandemic has forced people to ponder the big, existential questions they can no longer push to the back of their minds. What do I want to do with my life? Does my current situation bring me happiness? What things would I like to change when life returns to a state of relative normalcy?

And, more urgently: What’s inside your butthole?

Not everybody is asking that last one. But actress and musician Lisa Rieffel’s daughter desperately wants to know. On Saturday, the singer tweeted a video of her daughter clutching a guitar and singing an original composition titled “I Wonder What’s Inside Your Butthole.” In two days, the clip has earned 327,000 likes, 74,000 retweets, and an astounding 6.6 million views.

“Quite honestly, it slaps,” Rieffel wrote—and she wasn’t just having a proud mom moment. The song’s a certified rager. In the 20-second clip, her daughter lays out a catchy hook and expands upon it with several hypotheticals. Her sassy delivery and stray guitar strums are the bedrock of a successful indie-punk anthem.

Here are the full lyrics to super-hit-in-the-making “I Wonder What’s Inside Your Butthole”:

I wonder what’s inside your butthole

I wonder what’s inside your butthole

All inside your butthole

What’s inside your butthole?

What’s inside your butthole?

The song has already received several remixes, including one from singer-songwriter Jonathan Mann, who has written and published a new song and video every day for 11 years and uploads his creations to his popular YouTube channel.

Finally, a question that society can collectively revel in asking.