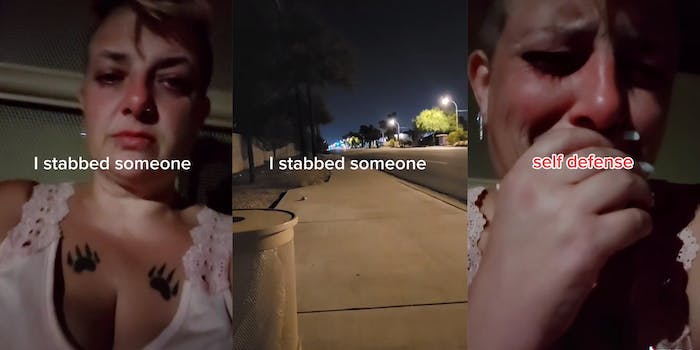 Bizarre ‘I stabbed someone’ TikTok is leading to absurd recreations

It has a lot of oddities.

Usually, an admittance that a person may have stabbed someone else is cause for plenty of concern. However, in the case of a recent TikTok video, it now sparked several memes on TikTok that copy the original’s strange aesthetics.

A few days ago, Jade Burton posted a video claiming to have stabbed someone.

“I stabbed someone,” the video’s captions read. “self defense. killing me.”

However, the TikTok video isn’t a cold confessional. Burton shows several shots of herself looking upset and the video includes footage of police sirens filmed at a distance outside. The captions being read are likely a result of TikTok’s text-to-speech feature. But mostly, the video is raising eyebrows for its use of Normani’s “Wild Side”—which includes a line of dialogue spoken by Killmonger in Black Panther—as well as transitions and a slow zoom filter.

Many of the commenters were torn about the TikTok video. Some people were confused about whether it was real, but more often than not, they commented that it was fake by the use of the filters, the Normani song, and the transitions. As TikToker Noah Glenn Carter put it, “To make this video even more bizarre, she filmed it like it was a thirst trap set to thirst trap music.”

“My g stabbed someone and makes a tiktok with transitions😭,” zainaballami wrote in the comments, which Burton liked.

The video is likely fake, but, like many TikTok videos before it, it spread beyond Burton’s feed and sparked several other TikTokers to recreate the video with their own twists. It’s reminiscent of the POV trend of TikTokers pretending to get arrested.

For example, noelmulk0 used his lengthy hair to full effect when attempting to recreate the TikTok.

Some people included alternate footage in place of the police cars. TikToker madozilla showed someone laying on the floor and pretending to be dead when recreating the TikTok.

There’s no real rhyme or reason as to what goes into recreating the “I stabbed someone” TikTok. But one thing is clear: The more over-the-top you can go, the better.

Update 3:30pm CT: This article has been updated to reflect the correct spelling of Normani’s name.