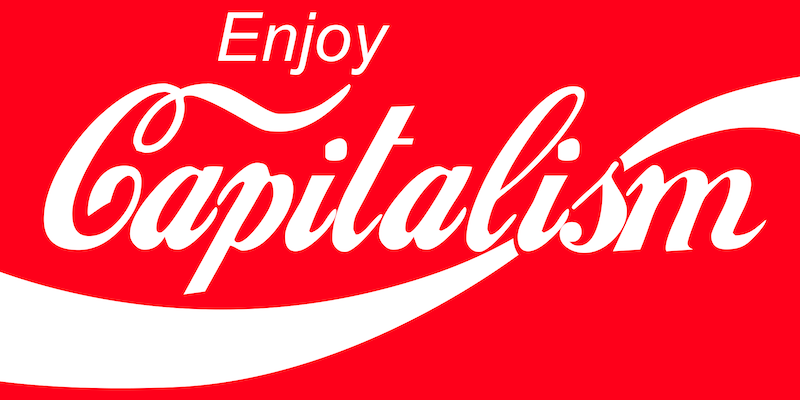 Humans of Late Capitalism reveals the dystopia we all live in

The year is 2018. The world’s richest man, Amazon’s Jeff Bezos, eats an iguana. He builds a home with 25 bathrooms. He says in an interview that he can’t think of anything to do with his money other than go to space. Meanwhile, his warehouse employees and delivery drivers are afraid to take bathroom breaks for fear of getting fired. They worry they may have to wear devices that track their productivity. This is the absurdity of the way we live now, and no one is better at illustrating how it affects us all than the anonymous poster behind “Humans of Late Capitalism.”

It’s one thing to say that we inhabit a global society defined by stark economic inequality, exploitation of labor and the environment, mass surveillance, and the commodification and branding of absolutely everything. It’s another to show it to you. And that’s exactly what Humans of Late Capitalism does, curating photos that bring into focus the cruelty and dark humor of the conditions under which we all live. The images are simultaneously stupid and true, heartbreaking and hilarious.

The “Humans of” format was popularized in 2010 by Humans of New York, a Facebook page that pairs close-up photos of New Yorkers’ faces with a few sentences of a personal story. It’s meant to be uplifting, but it’s been criticized as empty and manipulative. HONY reduced the lives of others to a consumable package for maximum sharing and “like”ability, but Humans of Late Capitalism, which operates on Twitter, Facebook, and Instagram, turns that on its head. The images the account shares are about how we all constantly consume and are consumed, according to the whims of global capital.

HOLC doesn’t bother with captions. Its absurd collection of photos of the late capitalist condition speak for themselves. We see animals wear surveillance equipment, fight with drones, and generally perform for human amusement. Celebrities live in their own worlds, spending money in ways that seem bizarre to the rest of us. Technology malfunctions and becomes trash. Workers suffer indignities at the hands of corporations and tech CEOs, and consumers still worship their favorite brands. Meanwhile, any attempt to resist capitalism is commodified and sold back to us.

But what is “late capitalism,” anyway? It’s been around since the end of World War II, describing the rise of giant multinational corporations and the globalization of finance. It was called “late” capitalism because globalization seemed to be pushing things to a breaking point, and Marxist thinkers speculated that the circumstances would soon be right for socialist revolution. But over the past 30-ish years, since the fall of the Soviet Union, “late capitalism” has taken on a different meaning.

Marxist political theorist Fredric Jameson popularized the contemporary version of the term in a 1991 essay called “Postmodernism, or The Cultural Logic of Late Capitalism.” For him, late capitalism is what happens when culture is commodified and consumed—and then that culture of consumption becomes commodified.

We now define ourselves largely by what we consume, and in a socio-economic landscape marked by social media and Citizens United, #brands are people, my friends. You’re Coke or Pepsi, Krusty Krab or Chum Bucket, Jacobin or National Review. Even anti-capitalism has become a consumable cultural signifier. As Delilah Friedler recently pointed out in an Outline piece about the corporatization of music festivals, “the majority of young people today oppose capitalism, but many of us … have also learned to embrace it ironically.”

Eye-rolling, shrugging, hey-what-can-you-do mentions of “late capitalism” took off on social media after the 2008 financial crisis and the resulting Occupy Wall Street movement, Annie Lowrey pointed out in The Atlantic this year. And it’s this ironic stance that defines Humans of Late Capitalism.

The social account is an entertainment product—a brand, if you will—that also happens to point out how utterly absurd and rotten consumer culture has gotten. HOLC pays special attention to the places where Late Capitalism’s seams are showing—where expensive consumer technology goes wrong, where CEOs and celebrities put on displays of wealth so ostentatious that it becomes comical, where human production collides with nature in ways that would be hilarious if they weren’t so sad. There are also lots of photos of molten lava, which will ideally one day eat us all in a final, delicious act of global consumption.

“Late capitalism” is practically the air we breathe at this point. We’re all experiencing it, participating in it, and affected by it—and when things go according to plan, we don’t notice. We just keep going to work, enriching absurdly wealthy CEOs, giving our data to social networks and advertisers, and buying more stuff. Always more stuff. Humans of Late Capitalism is about what happens when things don’t go according to plan. It’s about the little glitches in the Matrix of the consumption cycle, where we see something that looks weird, sad, or hilarious, but actually makes total sense as a consequence of consumer culture and sharp income inequality.

Check out the HOLC view of the one percent, for example. These posts highlight some of the bizarre results of income inequality, which results in the super-rich having life experiences that are alien, even funny to the rest of us.

He also ate this, by the way:

And here’s rocker/philanthropist Bono asserting that “selling out” is the same thing as “having a job.”

But the alienating effects of capital can suck for everyone, even celebrities. In some HOLC posts, we see the famous—especially famous people of color—treated like exotic zoo animals. Here’s Kanye West pretending to piss on a wall in front of the paparazzi:

And here’s a crowd keeping their distance from Rihanna at the beach, treating her as one might an endangered sea turtle:

Humans of Late Capitalism takes a similarly wry view of consumer technology. Posts tend to show tech malfunctioning or looking ridiculous, alienating humans from one another, extracting every last penny from the consumer, interacting in harmful ways with animals or the environment, or being improvised in embarrassing, cargo-cultish ways.

Brands, another of HOLC’s favorite targets, get a similar treatment. Sometimes it’s people’s voluntary allegiance to brand logos and corporate mascots, and sometimes it’s the indignity of having these logos and characters forced upon us. It’s become an internet cliché to say that someone is “all of us,” but this guy shoveling snow in a Maruchan Cup-o-Noodles costume is a pretty good metaphor for life under late capitalism:

And mice “worshipping” a crucified Mickey Mouse really sums up HOLCs relationship with brands in general.

Even anticapitalism has been co-opted as a sort of brand, or a series of slogans. Don’t forget to purchase your hammer and sickle iPhone case and a T-shirt celebrating “the class struggle”:

HOLC also posts messages the creator receives from people who don’t quite get the point of the page—or maybe they’re embracing it ironically? This person, for example, wanted to make a Humans of Late Capitalism T-shirt, complete with the account’s dove emoji “logo.”

Messages like these tend to highlight how all-pervading capitalism really is in contemporary culture. People identify with a Twitter account that takes shots at the rise of our corporate #brand overlords, but their first thought about how to incorporate that critique of consumption into their own identities is to buy the T-shirt. (This isn’t a new problem, by any means. When Jacobin started selling tote bags in 2017, it waved off the tension with a joke: “We used to be a Marxist journal, then we became a socialist magazine, and now we’ve realized our final synthesis: we are a lifestyle brand.”)

HOLC sidesteps this awkward contradiction by showing, not telling. It doesn’t publish think pieces, propose solutions, or speak in generalities. It just delivers a steady drip of specific harms caused by the dominant economic paradigm. The power of the image speaks to people in ways that quoting Marx or Slavoj Zizek (who makes several amusing appearances in HOLC photos) just can’t.

It’s not clear who’s behind HOLC, or even what country they’re from. And because it doesn’t lean on a particular language, its 38,000 Twitter followers are a diverse bunch. Americans, sure, but also big clusters of fans in Brazil, Argentina, and Germany. The creator of the account didn’t respond to interview requests for this story.

Honestly, there might not be an explanation or a backstory they could give that would do anything to enhance one of the only must-follow social media accounts of our time. The essence of HOLC is that we’re all Humans of Late Capitalism. We’re all in this dystopia together, looking through our internet lenses as corporate titans frolic and regular people either become more like robots or get replaced by them. It’s a shitty state of affairs, but it’s also one that an individual scrolling Twitter may feel powerless to change. But maybe there’s some power in laughing at it.